You Are Here: Home » Application of Doppler Effect in the Measurement of Light 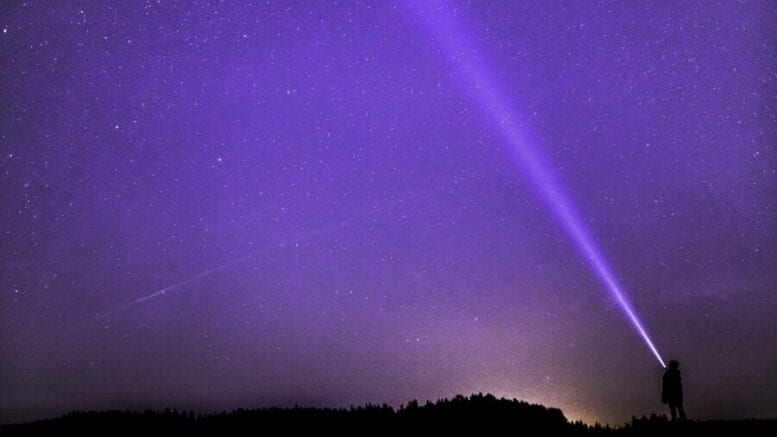 In understanding the application of Doppler effect on the measurement of light, we must note that the speed of distant stars and planet has been estimated from measurements of the wavelengths of the spectrum lines which they emit. Suppose a star or planet is moving with a velocity v away from the earth and emits light of wavelength Ʌ. If the frequency of the vibrations is f cycles per second, then f waves are emitted in one second, where C=f  Ʌ and c is the velocity of light in vacuo. Owing to the velocity v, the f waves occupy a distance (c + v). Thus the apparent wavelength Ʌ’ to an observer on the earth in line with the star’s motions is

From (i), it follows that Ʌ’ is greater than Ʌ when the star or planet is moving away from the earth, that is, there is a ‘’shift’’ or displacement towards the red. The position of a particular wavelength in the spectrum of the star is compared with that obtained in the laboratory, and the difference in the wavelength, Ʌ’ – Ʌ is measured. From (i), knowing Ʌ and c, the velocity v can be calculated.

If the star is moving towards the earth with a velocity u, the apparent wavelength is given by

Since  is less than Ʌ, there is a displacement towards the blue in this case.

In measuring the speed of a star, a photograph of its spectrum is taken. The spectral lines are then compared with the same lines obtained by photographing in the laboratory an arc or spark spectrum of an element present in the star. If the former are displaced towards the red, the star is approaching the earth. By this method the velocities of the stars have been found to be between about 10km s– 1 and 300km s-1.

The Doppler effect has also been used to measure the speed of rotation of the sun, photograph are taken of the east and west edges of the sun; in the sun, and also absorption lines due to elements such as iron vaporized atmosphere. When the two photographs are put together so that the oxygen lines coincide, the iron lines in the two photographs are displaced relative to each other. In one case the edge of the sun approaches the earth, and in the other the opposite edge recedes from the earth. Measurements show a rotational speed of about 2 km s-1.

READ MORE:  How to Measure the Partial Pressure of Atmospheric Water

A radio wave is an electromagnetic wave, like light, and travels with the same velocity, c, in free space of 3.0 x 105 km s-1. The Doppler Effect with radio waves can be utilized for finding the speed of aeroplanes and satellites.

As an illustration, suppose an aircraft  C sends out two radio beams at a frequency of 1010 Hz; one in a forward direction, and the other in a backward direction, each beam being inclined downward at an angle of 30 to the horizontal. A Doppler effect is obtained when the radio waves are scattered at the ground at A, B, and when the returning waves to C are combined; a beat frequency equal to their difference is measured. Suppose the beat frequency is 3 x 104 Hz

Where ϴ is 30. The frequency f1 of the wave received back at C from A is given by

From (i). similarly, the frequency f­2 of the waves received back at c from B is given by

Uses and Working Principles of a Dilatometer