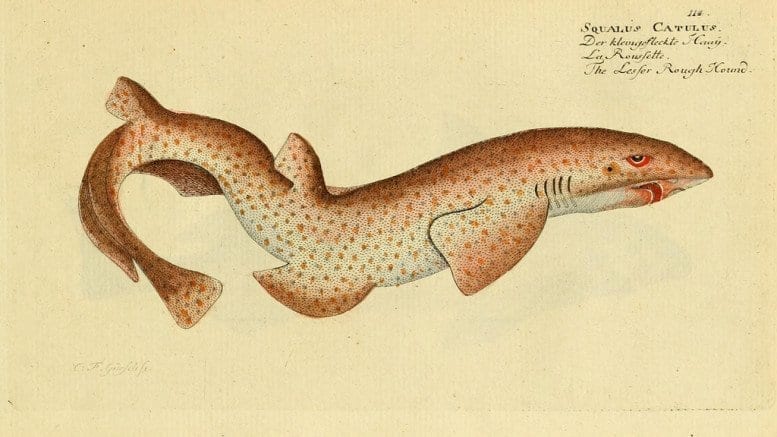 Before we delve into the dogfish Scyliorhinus caniculus as an aquatic craniate, lets first take an over view of two important vertebrate branches, the Agnatha and the Gnathostomata. The Agnatha are certainly the more primitive and they show strong relationships with the Palaeozoic Ostracodermi which are the earliest known craniates fossils. In the latter branch are forms ranging from the most primitive fishes to man himself. The cartilaginous fishes were probably the first true fishes to appear, their fossilized remains being found in rocks of the Silurian period. They are all placed in the sub-class Chondrichthyes, the other extant sub-class being the Osteichthyes, the bony fishes.

Scyliorhinus: The dogfish shows most of the characteristics of the sub-phylum in their generalized form, and in addition, the animal is plentiful and of a suitable size for dissection. The species we are referring to here is the spotted dogfish, Scyliorhinus caniculus.

Habitat and habits of the Dogfish

Dogfish are entirely marine and are plentiful in the waters of the European continental shelf. Similar species are found in most parts of the world. They justify their common name by hunting in packs and by their great reliance on their highly-developed sense of smell. 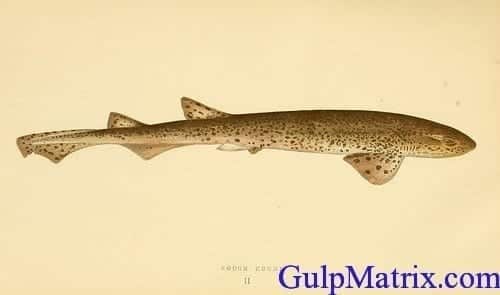 Urinogenital System of the Male Dogfish

The male dogfish Scyliorhinus caniculus is not typical of anamniotes in that the Wolffian duct is not utilized for both sperm and urine. The kidneys are mesonephric and lie on each side of the dorsal aorta, covered with the tough peritoneum. They are very long and extend almost the entire length of the body cavity, gradually tapering anteriorly. The front half consists of soft masses of tissue known as Leydig’s gland and overlying this is the white, much-coiled vas deferens. The posterior portion is the urinary part of the kidney and from it five ducts lead into a ‘ureter’. The two ‘ureters’ enters a small urinogenital sinus which opens into the cloaca by a protruding urinogenital papilla. The testes are long cylindrical organs tapering slightly towards the posterior ends; they are suspended along the anterior half by the mesorchium. Each consist of numerous tiny discrete ampullae within which the sperm develop. The sperm Scyliorhinus caniculus of pass through a number of vasa efferentia in the anterior region of the mesorchium to enter the vas differens. Seminal fluid, which nourishes the sperm is added by Leydig’s gland. Posteriorly, the vas deferens is dilated to form a vesicual seminalis in which the sperm are stored; this enters the urinogenital sinus. The vas deferens and vesicular seminalis represent the Wolfian duct with possibly part of the sinus as well. In the front of the body cavity, ventral to the oesophagus, are the vestigial funnels of the Mullerian duct, and extending backwards from the urinogenital sinus are the blindly ending sperm sacs. Beneath the skin of the ventral surface is a thick-walled muscular sac, the siphon. It extends back from the cloaca for about two inches and communicates by small channels with the grooved claspers, which are analogos with the penis in higher craniates.

Be the first to comment on "DogFish: Scyliorhinus caniculus Species"