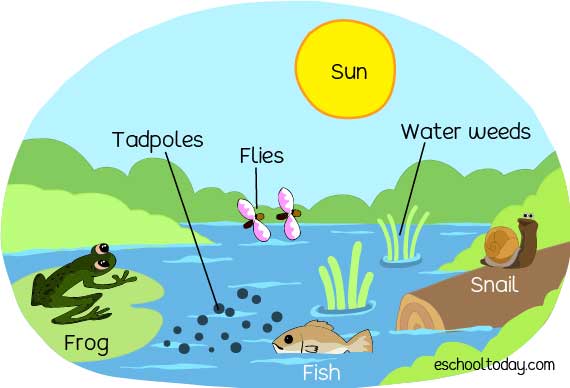 What Exactly is an Ecosystem?

In an ecosystem, living entities form an inner hierarchy consisting of producers, decomposers, and consumers. They interact with one another, forming the food chain within the ecosystem.

Linking within these food webs forms the foundation for complex webs and ecosystem attributes to exist.

All of the necessary materials for survival are derived from the ecosystem’s abiotic components, such as radiation, energy, and water, which are obtained through various biological cycles.

Energy travels in a single direction in an ecosystem.

The various types of  ecosystem include:

Forest ecosystems are areas of the landscape dominated by trees, and they are made up of biologically integrated communities of plants, animals, and microbes, as well as the local soils and atmospheres (climates) with which they interact.

A grassland ecosystem is one in which grasses and other herbaceous (non-woody) plants dominate the vegetation.

Tundra ecosystems are treeless areas found in the Arctic and on mountain peaks where the climate is cold and windy and rainfall is scarce.

Freshwater ecosystems are a subset of aquatic ecosystems on Earth. Lakes, ponds, rivers, streams, springs, bogs, and wetlands are examples.

What Exactly is a Biome?

Biomes on Earth, on the other hand, are zones defined by large-scale climate and vegetation characteristics.

They are a climate-controlled group of entities.

They are typically identified and named after the life form, such as grassland, coral reef, tropical rain forests, and so on.

Because of similarities in natural selection patterns, species in different parts of a biome may appear similar in behavior and appearance.

There are eight major terrestrial biomes, which are as follows:

Freshwater biomes include lakes, ponds, rivers, streams, and wetlands, which differ in depth, water movement, and other abiotic factors.

Oceans, coral reefs, and estuaries are examples of marine biomes.

Differences Between Biome And Ecosystem

The following are the distinctions between biome and ecosystem: