A modulus of elasticity of the wire, called Young’s modulus (E), is defined as the ratio

It should be noted that Young’s modulus , E, is calculated from the ratio stress : strain only when the wire is under ‘elastic’ conditions, that is, the load does not then exceed the elastic limit.

The ‘strain’ of a wire has no dimensions of mass, length, or time, since, by definition, it is the ratio of two lengths.

READ MORE:  How to Record Sound on a Tape or Film

The average extension for 3 kilogram is found by taking the average of (d – a), (e – b), and (f -c). Young’s modulus can then be calculated from the relation stress/strain, where the stress = 3 x 9.8/πr2, and the strain = average extension/original length of wire

At Royal Ordinance and other Ministry of Supply factories, tensile testing is carried out by placing a sample of the material in a machine known as an extensometer, which applies stresses of increasing value along the length of the sample and automatically measures the slight increase in length. When the elastic limit is reached, the pointer on the dial of the machine flickers, and soon after the yield point is reached the sample becomes thin at some point and then breaks. A graph showing the load v. extension is recorded automatically by a moving pen while the sample is undergoing test.

Here is an example we should look at: Find the maximum load in kgf which may be placed on a steel wire of diameter 0.10 cm if the permitted strain must not exceed  1/100  and Young’s modulus for steel is 2.0 x 1011 newton m -2. 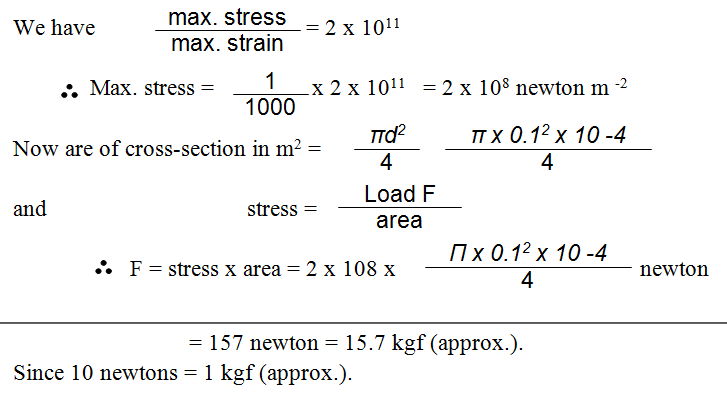 Force in Bar Due to Contraction or Expansion

When a bar is heated, and then prevented from contracting as it cools, a considerable force is exerted at the ends of the bar. We can derive a formula for the force if we consider a bar of Young’s modulus E, a cross-sectional area A, a linear expansivity of magnitude α and a decrease in temperature of toC. then, if the original length of the bar is l, the decrease in length e if the bar were free to contract = αlt.

Energy Stored in a Wire

Let’s assume  that a wire has an original length l and is stretched by a length e when a force F is applied at one end. If the elastic limit is not exceeded, the extension is directly proportional to the applied load. Consequently, the force in the wire has increased in magnitude from zero to F, and hence the average force in the wire while stretching was F/2. Now

Elasticity  is the amount of energy stored in the wire. The formula ½ Fe gives the energy in joule when F is in newton and e is in metre. 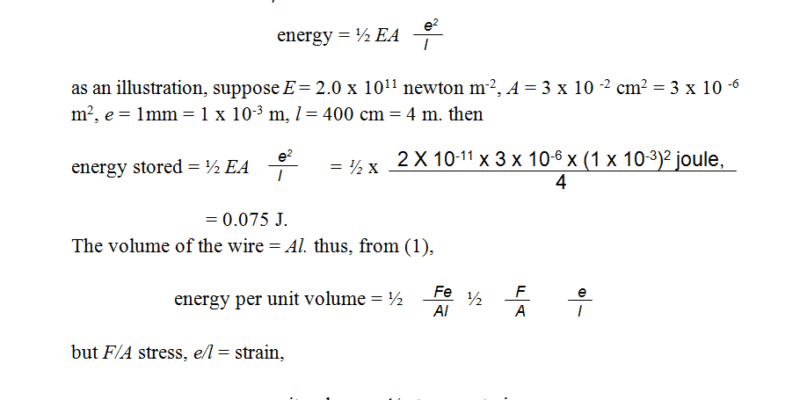