The processes that makes a creature alive such as excretion in humans can be generally described as chemical reactions that perpetuate themselves. Many of these reactions, respiration for example, release energy that is used in setting off other reactions. A these reactions give rise to end products, some of which are poisonous or could affect the normal chemical reactions in the body if they were allowed to accumulate.

Even apparently permanent structures of the body such as the muscles, blood, skin and internal organs are, in fact, changing from day to day. The chemical units of living protoplasm are constantly being renewed. New molecules are being added, degenerate molecules or entire cells are being digested away. For example, an amino acid in some protein eaten one day may be built into the living protoplasm of a muscle fibre the next day. Later, the same amino acid may be broken down and the products carried off in the blood stream. The products of this kind of protein decomposition contains nitrogen, ammonia being one of the most common compounds. If nitrogenous compounds were allowed to accumulate in the body they would cause death in a matter of days or weeks.
Excess amino acids absorbed after a meal containing protein are deaminated in the liver. Deamination also gives rise to ammonia and other nitrogenous compounds.

Excretion is the process by which such harmful products are removed from the body as fast as they exceed a certain concentration.

READ MORE:  15 Endocrine Glands and their Functional Roles in a Rabbit

The main excretory products in animals are carbon dioxide and water from respiration, nitrogenous compounds from the breakdown of proteins or excess amino acids. The nitrogenous compounds such as ammonia are converted in the liver into substances such as urea and uric acid which are less poisonous to the body. 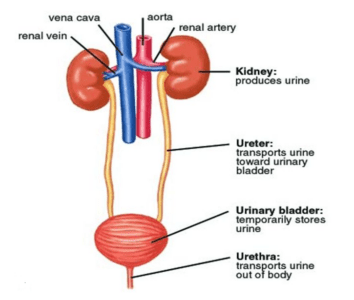 The kidneys perform very vital roles in excretion in humans. It is involved in the removal of nitrogenous compounds from the blood and eliminate excess water and salts, so keeping the concentration of the blood constant. An animal with a normal diet is constantly taking in water and salts with it’s food. Any salts above a certain concentration and any excess water are being removed from the blood as it passes through the kidneys.

The Structure of the Kidney:

The two kidneys are involved in excretion in humans and are fairly solid, oval structures, with an indentation on their innermost sides. They are reddish-brown, enclosed in a transparent membrane, and attached to the back of the abdominal cavity. The renal artery, branching from the aorta, brings oxygenated blood to them, and the renal vein takes deoxygenated blood away to the vena cava. A tube, the ureter, runs from each kidney to the base of the bladder in the lower part of the abdomen.

The kidney tissue consists of many capillaries and tiny tubes, called uriniferous tubules, held together with connective tissue. A section through a kidney shows a darker, outer region, the cortex, and a light inner zone, the medulla. Where the ureter leaves the kidney is a space called the pelvis.

READ MORE:  What You Need to Know About Chloroquine and COVID-19

The renal artery divides up into arterioles and capillaries, mostly in the cortex. Each capillary leads to a glomerulus, which is a capillary repeatedly divided and coiled, making a little knot of vessels.
The glomerulus is almost entirely surrounded by a cup-shaped organ called a Bowman’s Capsule, which leads to a coiled uriniferous tubule. This tubule, after a series of coils and loops, joins other tubules and passes through the medulla to open into that pelvis at the apex of a pyramid.

Mechanism of Excretion in the Kidney:

In understanding the mechanism of excretion in humans, we shall examine some of these salient details: The capillary leaving the glomerulus is narrower than the one entering it, so that a high pressure is set up. This pressure causes fluids to filter out through the capillary walls and connect in the Bowman’s Capsule. The filtered fluid contains glucose, salts and nitrogenous waste dissolved in water, but proteins and fibrinogen remain in the blood. In man, 180litres per day of this filtrate, carrying 145g glucose and 1,100g sodium chloride pass into the Bowman’s Capsules. As the filtered serum passes down the uriniferous tubule, all the glucose, some of the salts and much water are absorbed back into a network of capillaries surrounding the tubule. This selective re-absorption prevents the loss of useful substances from the blood serum. The remaining liquid contains only the poisonous nitrogenous compounds and excess salts and water, called urine. It passes down the uriniferous tubule to the pelvis of the kidney where it collects and continues down the ureter to the bladder as a result of waves of contraction in the ureter.

The capillaries from the glomeruli and the uriniferous tubules unite to form the renal vein.
Energy from respiration is used by the kidney to effect re-absorption, the blood in consequence leaving the kidneys in the renal vein containing less oxygen and glucose, more carbon dioxide and as a result of excretion, less water, salts and nitrogenous waste.

2. The Bladder:
The bladder is an extensible sac with elastic and muscular tissue in it’s walls. The volume of accumulating urine entering the bladder from the ureters, extends it’s elastic walls to a volume of 400cm^3 or more. At intervals the sphincter muscle which closes the outlet to the bladder relaxes and the bladder contracts, aided by the muscles of the abdomen, expelling the urine through a duct called urethra. In babies, the sphincter muscle is controlled by a reflex action triggered off by nerve endings in the stretched walls of the bladder. After about two years or less the muscle can be controlled voluntarily.

Follow us
Tagged with excretion, Excretion in Humans, Kidney, osmoregulation