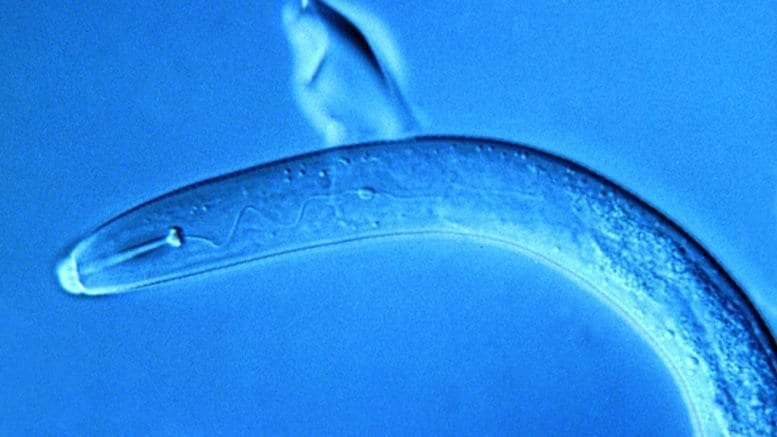 The phylum Nematoda(Nematodes), or true roundworms, includes a great number of species, some of which are free-living and others parasitic. The body is elongated, cylindrical, and covered with a tough cuticle. The latter may be extended laterally into alae; it may be smooth or transversely striated, and it may bear minute bosses, or be reinforced with spiral or annular thickenings.

Papillae frequently occur in the vicinity of the mouth and anus. Sometimes a pair of cervical papillae is present, these being situated laterally, one on each side. In the males of the super family Strongyloidea the cuticle of the posterior extremity is folded into a copulatory bursa. The body is usually marked by four longitudinal thickenings, one dorsal, one ventral, and two lateral, which run internally along the whole length of the worm. Those situated laterally are the most prominent and are known as lateral lines or chords; through then run the excretory tubules.

The oral aperture may be directed anteriorly or dorsally, it may be round or slit-like, and is often provided with lips anteriorly. It sometime leads into a large mouth cavity lined with chitin, which may bear cutting organs, either teeth, or chitinous plates or both. In other cases the mouth cavity is practically absent and the oral aperture is the termination of the oesophagus.

The oesophagus leads out of the oral cavity and is usually muscular; into it open three glands, one characteristic that it may be used as an aid to identification. It is separated by strong valves from the straight, tubular mid-gut or intestine which, being of endodernal origin, is not lined with cuticle; for this reason when the larva mouth the intestinal lining is not cast though the cuticular linings of the oesophagus and rectum are. The intestine continues into a short rectum which discharges through the anal opening, situated usually on the ventral surface close to the posterior and of the body. In the male the anus discharges into the cloaca.

The excretory system consists of two tubules embedded in the lateral chords, which commence posteriorly and unite in the mid-ventral line in the oesophageal region where they discharge through a single excretory pore.

READ MORE:  Types of Fungi, their Reproductive and Feeding Mechanisms

The nervous system consists of a peri-oesophageal ring connecting two groups of ganglion cells; from this ring arises a number of nerve trunks which run anteriorly and posteriorly. Sensory organs consist of the papillae situated around the mouth, on the cuticle near the nerve ring and in the genital region of male nematodes.

As already stated, the sexes usually are separate. The male is always smaller than the female and has a tail which is often coiled ventrally. In many species the male appears to be degenerate.

The male genital organs consist of a very long convoluted tube occupying the greater part of the length of the body. From the genital pore the tube gradually decreases in caliber, its distal extremity being delicate. The section near the pore is a rather stout, muscular, ejaculatory duct which discharges spermatozoa into the cloaca. The middle portion is the vas deferens on which a seminal vesicle is present in some species, and the distal part is the testis.

Occasionally “cement glands” surround a portion of, and open into, the ejaculatory duct. The glands secrete a cement-like substance which serves to anchor the male to the female during copulation. The bursa copulatrix is also an accessory copulatory organ. In many nematodes there are one or two chitinous, protrusible compulatory spicules, of shapes and sizes which vary according to the species and sometimes are useful in identification. They normally lie within sheaths and their movement is controlled by special muscles, the direction being guided by the gubernaculums.

The female genitalia usually consist of two convoluted tubes occupying the greater part of the body and opening into the vulva which is always minute and on the ventral surface. In oviparous species its position varies but it is usually situated somewhere in the middle three-fifths of the body; in species which are viviparous the vulva is always close to the mouth. Near the vulva the convoluted tubes unite into a short common duct, the vagina. Each tube gradually decreases in diameter as it recedes from the vagina and the terminal part is extremely tenuous. In a broad way, the distal part of each tube is the ovary, the middle part is the oviduct, and the portion near the vagina is the uterus. These parts pass into each other by imperceptible gradations. 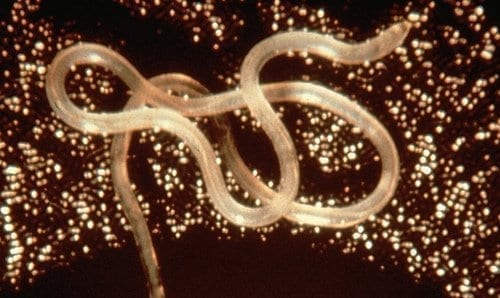 The eggs of the nematodes infecting man are never operculate and usually the egg ruptures to release the contained larva; in one genus plugs are present at the poles of the egg. The state of development of the ovum or embryo contained in the egg when it is passed varies with the species of worm and is related to the length of time spent by the egg in the uterus before deposition. Thus, when the egg is laid the ovum may be unsegmented, in a state of early or advanced segmentation, or of early larval development, while in some species a mature larva is present which hatches immediately. In none of the nematodes is the egg infective to man when passed; it can only become so after a larva (a minute and immature worm) has developed inside it, and in some species it is not infective even then. Development to the infective form takes place outside the body of man, in most cases, either on the soil or in an insect or crustacean host. In come species the adult worm and the larva habitually or occasionally occur in the same host; in these cases the larva infects man on being swallowed and the infection is not transmitted from man, or else the whole life cycle or the worm can be completed in man.

In this section on nematodes, we use the term larva in a very general sense to indicate the stages variously referred to by different authors under the names, embryo, larva, and vermicule. These three terms are impossible to define and we prefer the one term larva, which is itself difficult to define, rather than complicate the matter by using three undefinable terms.

The life cycle, after the egg or larva is deposited, varies with the degree of development taking place in the host and with the route by which it leaves the host. Thus, eggs which are passed in the faeces in an early stages of development mature on the ground, the larvae may infect man when the mature egg is swallowed, or the larvae may hatch, develop to the infective form during a free-living period, and then penetrate the skin of the host and make their way to the habitat of the adult. In the species in which larvae are passed out in the faeces, a free-living phase usually follows during which the infective form develops, which eventually penetrates the skin of the host.

READ MORE:  Significance of the Galapagos Islands on the Evolution of Species

Some nematodes infecting man are viviparous and in these the eggs hatch in the uterus so that the worms gives birth to an active larva. In all of these two hosts are required. In only one species has the larva any free-living stages outside a host and in this case it only lasts a few hours; survival depends on the larva being ingested by a small crustacean which subsequently carries the infection to man when he drinks water containing the infected crustacean. In another species which occasionally infects man the life cycle is peculiar in that the adult worm occurs in the intestine and the larvae in the muscular system of the same host ; infection of man is the result of his swallowing the encysted larvae which are found in the flesh of the pig. In all the remaining viviparous nematodes in man the larvae occurs in the peripheral blood or skin and are taken up by biting insects in which the infective form develops; this is later transmitted to man when the insect bites.

Parasitism and the Adaptive Characteristics of Parasites

Botflies Are Nasty Parasites That Get Under Your Skin

Be the first to comment on "Detailed Description of the Nematodes"