Dinitrogen pentoxide is the anhydride form of nitric acid, which is able to exist as a colourless crystal. It is also said to melt at 30 – degree Celcius. A rather unstable oxide of nitrogen, dinitrogen pentoxide is being used as an oxidiser in various chemical reactions. However, recently it has been replaced by nitronium tetrafluoroborate. 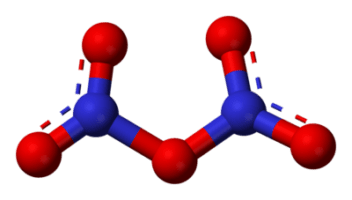 As  we stated earlier, Dinitrogen Pentoxide is made up of 2 Nitrogen atoms and 5 Oxygen atoms. Now let’s assume you want to draw the lewis dot structure of N₂O₅, then you must first grasp a few basic things as listed below:

So in N₂O₅, there would be:

Now, this means we will be working with a total of 40 valence electrons. The next step is to carefully go through the listed facts:

The Properties of Dinitrogen Pentoxide

Now let us dive into listing some important dinitrogen pentoxide:

The Preparation of Dinitrogen Pentoxide (N₂O₅) 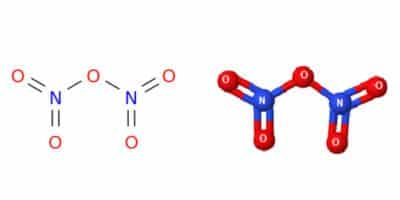 In order for us to prepare dinitrogen pentoxide, we will need to dehydrate nitric acid alongside phosphorus pentoxide. below is how the reaction will look like:

Moving forward, since N₂O₅ is produced from HNO₃, the salt that N₂O₅ produces will also be the salt of HNO₃. below is how the rection will look like:

We get sodium nitrate which is a salt of HNO₃.

The ionic Form of N₂O₅ – The ionic form of Dinitrogen pentoxide is known as nitronium nitrate. This can be experimented on using the following:

The sodium atom possess +1 charge, while the NO₃ atom possess -1 charge. Which simply means the ionic form of N₂O₅ is NaNO₃.

The Uses of Dinitrogen Pentoxide

Dinitrogen Pentoxide can be used for the following below: 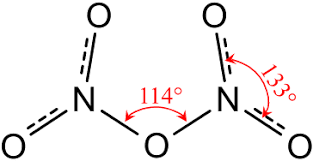 Below is how the balanced formula will look like:

So let’s take another instance, let’s say the passage of time is a. The initial concentration was b and the final concentration is z, then the formula needed to determine the average rate of decomposition will be:

Now, you might be wondering, why ½? Well, this is because we have written 2NO₂.

But again why minus sign? the reason is because the concentration is getting depleted.

Now let’s assume we were asked to discover the rate of formation of NO₂, the formula would look like

Again, you might be asking, why ¼? it is because we have written 4 NO₂?.

That’s all we can take for today, feel free to contribute in the comment section.