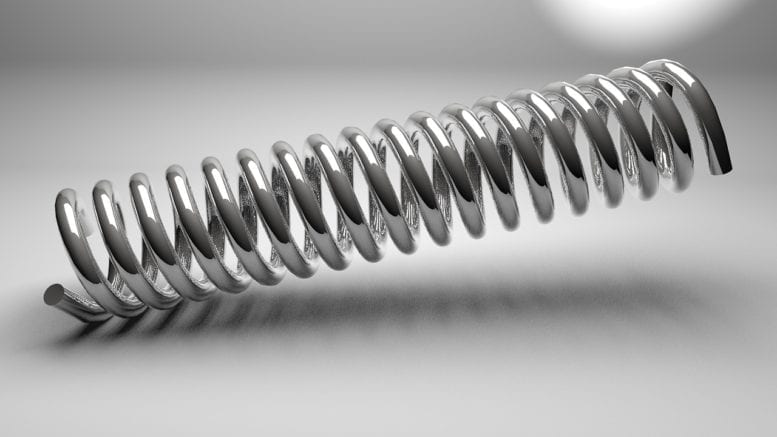 In understanding Hooke’s law, we can advance an illustration: A bridge, when used by traffic during the day, is subjected to loads of varying magnitude. Before a steel bridge is erected, therefore, samples of the steel are sent to a research laboratory, where they undergo tests to find out whether the steel can withstand the loads to which it is likely to be subjected.

[stextbox id=”info” defcaption=”true” float=”true”]Hooke’s law states that the force required to extend or compress a substance, a spring or any elastic material by given distance is proportional to that distance so long as the elastic limit has not been exceeded. [/stextbox]

In explaining the application of Hooke’s law and elasticity, we shall use hypothetical experimentation for better clarity. A simple laboratory method of measuring the elasticity of two long thin steel wires, P, Q, are suspended beside each other from a rigid support B, such as a girder at the top of the ceiling. The wire P is kept taut by a weight A attached to its end and carries a scale M graduated in centimeters. The wire Q carries a vernier scale V which is alongside the scale M.

The extension of a thin wire such as Q for increasing loads may be found by experiments to be as follows:

When the extension, e, is plotted against the load, W, a graph is obtained which is a straight line OA, followed by a curve ABY rising slowly. At first and then very sharply, up to about 5 kg, then, the results in the table show that the extension increased by 0.14 mm for every kg which is added to the wire. Further, the wire returned to its original length when the load was removed. For loads greater than about 5 kg, however, the extension increases relatively more and more, and the wire is thus permanently strained, and A corresponds to its elastic limit.

From the straight line graph OA, we deduced that the extension is proportional to the load or tension in the wire when the elastic limit is not exceeded. This is known as Hooke’s Law , after ROBERT HOOKE, founder of the Royal Society, who discovered the relation in 1676. The law shows that when a molecule of a solid is displaced farther from its mean position, the restoring force is proportional to its displacement. One may therefore conclude that the molecules of a solid are undergoing simple harmonic motion.

The measurements also show that it would be dangerous to load the wire with weights greater than 5 kilogrammes, the elastic limit, because the wire then suffers a permanent strain. Similar experiments in the research laboratory enable scientists to find the maximum load which a steel bridge, for example, should carry for safety. Rubber samples are also subjected to similar experiments, to find the maximum safe tension in rubber belts used in machinery.

READ MORE:  The Types, Working Principles and Uses of a Galvanometer

Carefully conducted experiments to prove Hooke’s law show that, for mild steel and iron for example, the molecules of the wire begin to ‘slide’ across each other soon after the load exceeds the elastic limit, that is, the material becomes plastic. This is indicated by the slight ‘kink’ at B beyond A  and it is called the yield point of the wire. The change from an elastic to a plastic stage is shown by a sudden increase in the extension, and as the load is increased further the extension increases rapidly along the curve YN and the wire then snaps. The breaking stress of the wire is the corresponding force per unit area of cross-section of the wire. Substances such as those just described, which elongate considerably and undergo plastic deformation until they break, are known as ductile substances. Lead, copper and wrought iron are ductile. Other substances, however, break just after the elastic limit is reached; they are known as brittle substances. Glass and high carbon steels are brittle.

Brass, bronze and many alloys appear to have no yield point. These materials increase in length beyond the elastic limit as the load is increased without the appearance of a plastic stage. These materials do not obey Hooke’s law

The strength and ductility of a metal, its ability to flow, are dependent on defects in the metal crystal lattice. Such defects may consist of a missing atom at a site or a dislocation at a plane of atoms. Plastic deformation is the result of the ‘slip’ of planes. The latter is due to movement of dislocations, which spreads across the crystal.

READ MORE:  Detailed Description of Resonance in Sound and Mechanics

How to Determine the Dimension and Magnitude of Young’s Modulus