For example, if you put a frog in the freezer, a cryobiologist would study how the cold temperatures affect the frog’s body and how it is able to survive or not. They might also study how to freeze cells or tissues for medical purposes, like preserving organs for transplants.

Cryobiology is a fascinating field that has a wide range of applications, from preserving food to helping people have children.

The science of cryobiology is based on the principle of cryopreservation and this process involves cooling living cells, tissues, or organs to extremely low temperatures, typically below -150 degrees Celsius.

The low temperatures slow down or stop the chemical reactions that occur inside the cells thereby preserving them in a state of suspended animation. Once the cells, tissues, or organs are unfrozen, they can continue to function as normal.

READ MORE:  How Does an Airplane Fly?

For example, cryopreserving cells is a simple and straightforward process, while cryopreserving whole organs is a much more difficult task and it is still an ongoing area of research.

Cryopreserving sperm and eggs for fertility treatments is also a widely used application of cryobiology. 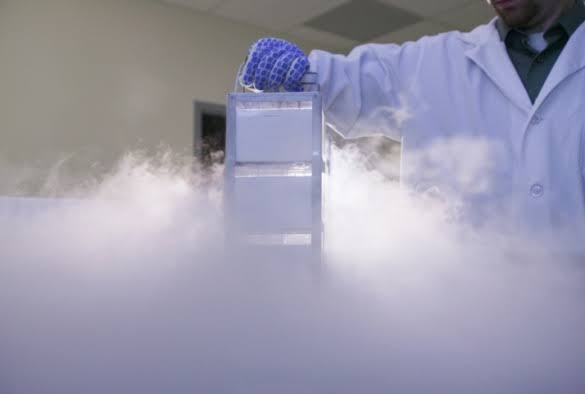 One of the most important applications of cryobiology is in the field of medicine.

The cryopreserved stem cells can be used for a wide range of medical treatments and even research.

Stem cells are special cells that can develop into many different types of cells in the body. By freezing them, scientists can keep them alive and ready to use for many years.

This is particularly useful for people who need bone marrow transplants, since the stem cells can be used to rebuild the patient’s immune system.

Another important application of cryobiology is in organ transplantation. In the future, it may be possible to cryopreserve organs like the heart, lungs, and liver, so that they can be stored until they are needed for transplantation.This would help to solve the problem of a shortage of organs for transplantation, since the organs would not have to be used immediately after they are donated.

Cryobiology is also used to preserve food. By freezing food, we can keep it fresh for much longer than if we stored it at room temperature. This is particularly useful for fruits and vegetables, which can become soft and spoil quickly.

Cryonics is another application of cryobiology that has generated a lot of controversy.

It is the practice of freezing a person who has died with the hope that they can be brought back to life in the future and the idea is that, with advances in medical technology, it may be possible to revive people who were cryopreserved and cure the illnesses that killed them.

Cryonics is one of the most controversial topics in the world, with many people arguing that it is unethical and that there is no scientific evidence to support the idea that people can be brought back to life after being frozen for a number of years. Others argue that cryonics is a legitimate form of medical research and that it should be allowed to continue.

READ MORE:  Why Is It So Hard to Make a Universal Flu Vaccine?

In conclusion, cryobiology is a fascinating field with a wide range of applications. From preserving food to helping people have children, it has the potential to improve many aspects of our lives.

The field of cryobiology is still in its infancy, but it is an exciting area of research with many potential benefits for humanity. Cryonics is a highly controversial topic, with many people arguing that it is unethical and that there is no scientific evidence to support the idea that people can be brought back to life after being frozen, but it is worth to take a deeper look into the field. If you’re interested in learning more about cryobiology, you can explore the many resources available online and in books.