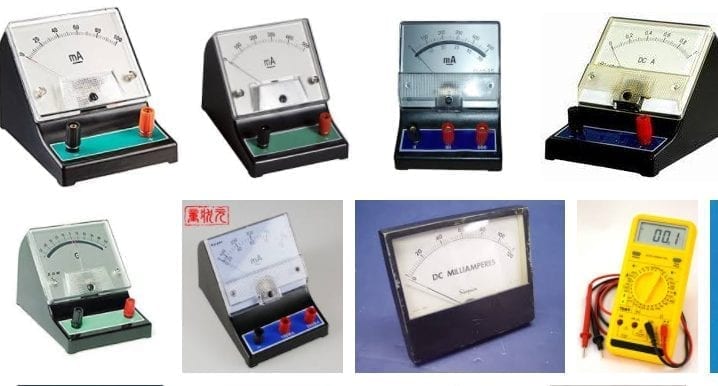 Ohm’s law enables us to use a milliammeter as a voltmeter. Let us suppose that we have a moving – coil instrument which requires 5 milliamperes for full-scale deflection (f.s.d.). And let us suppose that the resistance of its coil, r, is 20 ohms 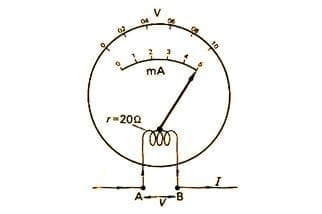 The potential differences to be measured in the laboratory are usually greater than 100 millivolts, however. To measure such a potential difference, we insert a resistor R in series with the coil, as shown in the diagram below. If we wish to measure up to 10 volts we must choose the resistance R so that, when 10 volts are applied between the terminals CD, then a current of 5 milliamperes flows through the moving coil. By Ohm’s law 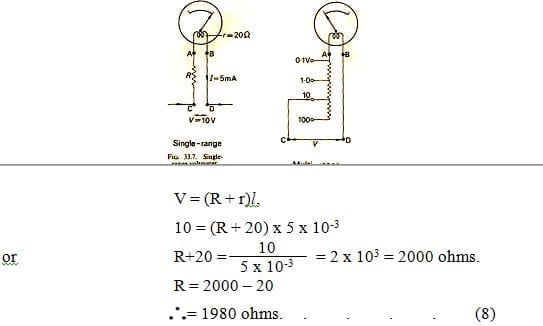 The resistance R is called a multiplier. Many voltmeters contains a series of multipliers of different resistances, which can be chosen by a switch or plus-and-socket arrangement.

Conversion Of A Milliammeter Into An Ammeter

In converting a milliammeter into a voltmeter, we must first understand that moving-coil instruments give full-scale deflection for currents smaller than those generally encountered in the laboratory. If we wish to measure a current of the order of an ampere or more we connect a low resistance S, called a shunt, across the terminals of a moving-coil meter. The shunt diverts most of the current to be measured, I, away from the coil-hence its name. Let us suppose that, as before, the coil of the meter has a resistance r of 20 ohms and is fully deflected by a current, I of 5 milliamperes. And let us suppose that we wish to shunt it so that it gives f.s.d. for 5 amperes to be measured. Then the current through the shunt is = 4.995amp 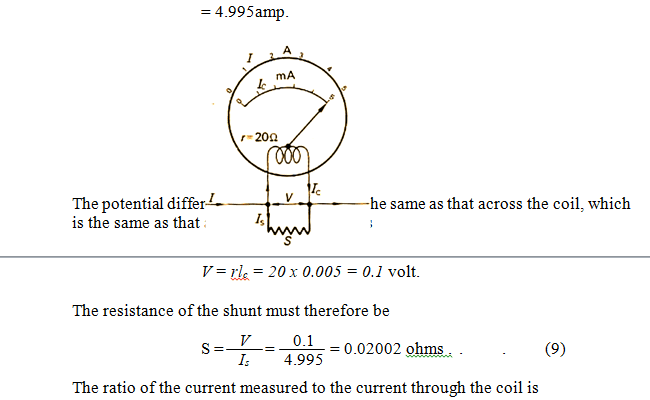 This ratio is the same whatever the current I, because it depends only on the resistances S and r; the reader may easily show that its value is ( S+r)/S.

The deflection of the coil is therefore proportional to the measured current, as indicated in the diagram above, and shunt is said to have a ‘power’ of 1000 when used with this instrument.