Condensation polymerization differs from addition polymerization in that small molecules such as water, ammonia or hydrogen chloride are eliminated during the formation of the polymer. If the two condensing monomers are of difference types, the resultant polymer is called a copolymer. If they are the same, then the resultant polymer is a homopolymer. Generally, the reaction is represented as follows: 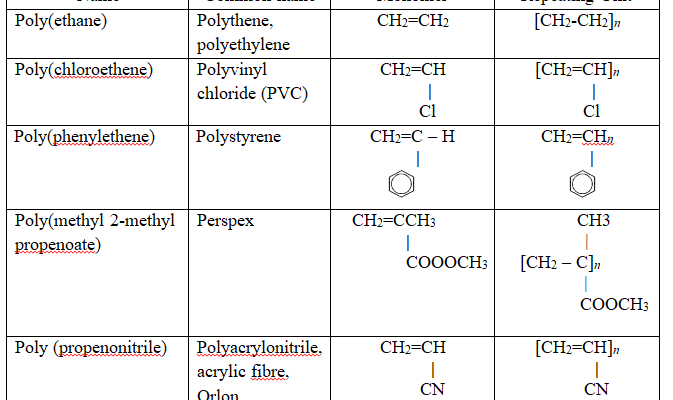 Condensation polymerization is the process whereby two or more monomers link together to form the polymer with the elimination of a small molecule.

In esterification reaction, the acid and the alkanol condense to give a dimer with the elimination of a water molecule. Since each monomer has only one active functional group, i.e a hydroxyl group, -OH, and a carboxylate group, -COOH, the reaction stops once the ester is formed.

The two most important condensation polymers are

Nylon is a Polyamide while Terylene is a Polyester.

This is a general term that refers to a group of synthetic fibres. There are many types of nylon. In nylon 6.6, the two monomers are hexane-1.6 diamine, H2N – (CH2)6 – NH2, and hexanedioic acid (adipic acid), COOH – (CH2)4 – COOH. Both monomers are bifunctional. In the initial condensation, the –COOH group of the acid reacts with the –NH2 group of the amine, with the elimination of water, to form the amide linkage group, -CO-NH-.

Nylon 6.6 can be prepared by mixing an aqueous solution of hexane-1,6-diamine to hexanediolic acid in tetrachloromethane.

Nylon is extensively used as a synthetic fibre because of its very high tensile strength. Thus nylon fibres are ideal for making ropes, fishing lines nets and racquet strings. Nylon is also used to replace many steel parts in machines like gears and bearings. These parts are not only hard but also smooth so that they do not need lubrication.

Nylon is used for making all kinds of clothing. Such clothing drip-dry easily, and are crease-free and resistant to fungal and moth attacks. However, nylon clothing do not absorb moisture and are uncomfortable to wear in warm weather. This property is common to clothing made of other synthetic fibres as well. Nowadays, most clothing made of nylon and other synthetic fibres contain a certain amount of natural fibres like cotton which can absorb moisture.

This is a polyster that is also known as Dacron in the U.S.A. it is formed by the condensation of benzene-1,4-dicarboxylic acid (terephthalic acid) and ethane-1,2-diol, using an acid catalyst.

Terylene is another synthetic fibre which is mainly used in the manufacture of synthetic textiles. It is soft and is capable of retaining an almost permanent crease. Woven terylene is used for making the sails of boats where a strong rot-proof material is required.

READ MORE:  Some Basic Properties of the Halogens - Group 17

Phenol-methanal is commonly known as Bakelite. This is a hard plastic or resin. It is formed by condensing hydroxybenze (phenol), and methanol in the presence of an acid or an alkali as catalyst. 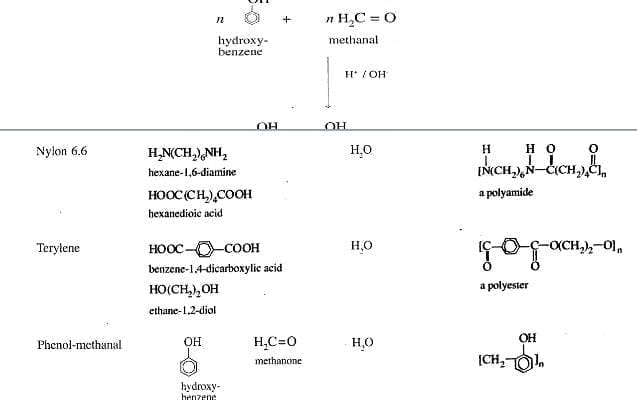 Various other synthetic resins may be produced using compounds other than phenols. For example,

Phenol-methanal is a dark-brown polymer which is often used to make plugs, switches, utensile handles, telephone casings, radio housing and sockets. Its excellent electrical insulating property, together with its non-combustible quality, makes it an ideal material for the electrical industry.

Urea-methanal is similar to phenol-methanal except that it is transparent and easily be coloured with pigments. It is used for making electrical fittings and kitchenware. This plastic is also prepared as a foam, which is commonly used as a heat insulator.

Melamine-methanal is similar to urea-methanal. It can be produced in attractive colours and is used mainly to make unbreakable, heat-resistant cups, plates and bowls.

Rubber is another group of important polymers. Both natural rubber and synthetic rubber are now available.

Rubber is obtained from the rubber tree, Hevea brasiliensis. When the bark of the tree is cut, a thick white liquid called latex oozes out. If the latex is collected and heated, it changes into an elastic solid called rubber. This rubber is of little use because it is soft and sticky. Chemically, it consists of 2-methyl buta-1,3diene monomers known previously as isoprene.

During condensation polymerization when the monomers polymerize, they form long polymeric chains which have only a limited number of cross-links between them. By adding sulphur and heating, the soft rubber becomes hard. This process is known as vulcanization. The sulphur atoms form strong cross-linkages which hold the long rubber chains together. This gives greater tensile strength, durability and elasticity over a wide range of temperatures. 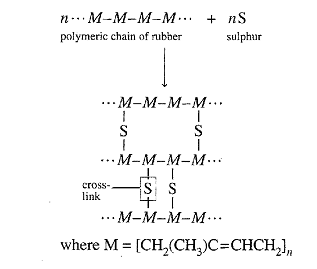 The first synthetic rubber was poly(2-chlorobuta1,3-diene) or neoprene. Later, styrenebutadiene rubber (SBR), Thiokol, poly(but-1,3-diene) and poly(2-methyl propene) were invented. Of these, SBR is the most useful all-purpose synthetic rubber.

SBR is obtained by the copolymerization of phenylethene (styrene) with three parts of aqueous buta-1,3-diene. It is vulcanized by carefully heating it with about 3% by mass of sulphur. As a result, bridges of sulphur atoms are formed between adjacent polymeric chains at the double bond positions. This gives SBR and synthetic rubber its elasticity and hardness.

SBR rubber is often used in making vehicle tyres and foot ware because of its high resistance to abrasion.