You Are Here: Home » Concise Description of the Physiology of Sponges 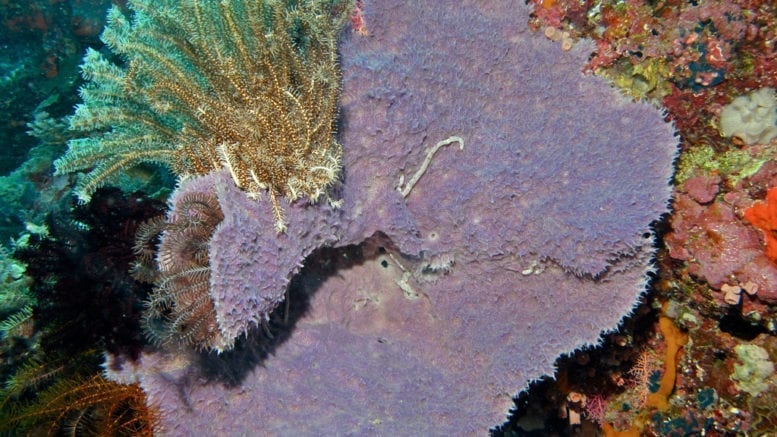 The Physiology of Sponges

In describing the physiology of sponges, we shall first tak a look at its feeding mechanism. All sponges feed holozoically. The flagella of the choanocytes beat inwards, creating inhalant currents through the ostioles. Small food particles of many types are ingested by the choanocytes at the base of the protoplasmic collar. The exact manner in which ingestion takes place is not known. The food is ingested intracellularly and it is presumed that the wandering amoeboid cells collect digested food from the choanocytes and distribute it to other types of cells. Water containing defaecated particles and excretory materials is swept out through the osculum by the exhalant current.

Respiration is aerobic, diffusion of oxygen being fully effective since no cell is far removed from water, growth is interstitial; every type of cell is capable of division. Most sponges are colonial and extension takes place by means of horizontal outgrowths, giving a basal portion which secretes a cementing substance fastening the colony to the substratum. Then, at irregular intervals, vertical outgrowths give rise to upright branches.

Excretion of nitrogenous material is probably largely performed by the amoeboid cells. They are said to convey such materials from other cells and discharge them into the paragastral cavity. With such ready access to water, diffusion would suffice for all excretion of soluble and diffusible products.

Sponges have no nervous system or special receptor cells. Responses to stimuli, even if the latter are violent, are slow and local. In many species, there is ability to effect slow closure of the inhalant pores by means of special contractile cells around their edges. These cells are stimulated to action by the cessation of water movement, and in still water, they contract slowly and effect closure. Thus they act both as receptors and effectors.

Reproduction occurs by asexual and sexual methods, though with many species, sexually-produced larvae have not been demonstrated. In asexual reproduction, external buds may become separated, or internal buds called gemmules, may develop. A gemmule is formed from a cluster of amoeboid cells; it becomes detached from the parent body and is drifted away to found another individual or colony.

Sperm and ova are produced from wandering amoeboid cells. All sponges are hermaphrodite and most are protandrous, so that cross-fertilization is probably the rule. One amoeboid cell divide many times to form a mass of small, tailed sperm. Each ovum is formed from a single cell which enlarges and becomes spherical. After fertilization, the zygote becomes invested with a layer of the parent’s cells. Within this, the early stages of development take place.

After cleavage, an ovoid blastula is formed, wholly or partly covered with flagellated cells; this is released into the water as a free-swimming larva and thus dispersal of the species is effected. Eventually, the larva settle down and by a remarkable process, the flagellated cells migrate through the inner cell layer and become the choanocytes, the internal cells passing out to form the coherent dermal layer. An aperture develops at the free end and becomes the osculum; special amoeboid cells become the porocytes; the jelly is secreted and growth begins.

Having developed a sedentary mode of life, sponges have developed suitable adaptations. Feeding, respiratory, and defaecating currents are set up by the constant inward beating of the flagella. The minute ostia prevent entry of particles too large for ingestion into the choanocytes, and the slow closure of the ostia may be a protective mechanism under certain conditions. There is effective dispersal by the swimming larvae. The sharp pointed spicules, which frequently project from the surface, render them immune from predation; no aquatic animals are known to eat sponges.

In describing further the physiology of sponges, it is important to note that sponges have reached the cellular level of organization. Although there are few types of cells, two types cover a considerable proportion of the surface; they are the pinacocytes and the choanocytes. The lack of any co-ordinating mechanisms precludes consideration of them as tissues. The presence of the highly-characteristic and peculiar chaonocytesindicates strongly their probable line of descent from chaonoflagellate protozoa.

In studying the physiology of sponges, it is also imperative to note that sponges possess remarkable powers of regeneration. Any small piece of the body can grow into a complete animal. If a sponge is forced through silk bolting-cloth into a dish of water, the cells soon aggregate into small clumps and each clump will develop slowly into the mature form.

Certain features distinguish the Porifera very clearly from the Metazoa. The principal and largest opening is exhalant. In all metazoan animals where there is a single large opening. It is inhalant primarily and exhalant secondarily. The minute pores of the sponges limit the food material to microscopic particles. Digestion is not a common function shared by a layer of cells all working in co-ordination, but each choanocyte acts as an independent unit. The complete absence of nervous system and sensory cells is another peculiarity. Finally, the migration of the flagellated cells from exterior to interior during development is found nowhere else.

The Adaptive Mechanism of Hydra to a Sedentary Lifestyle