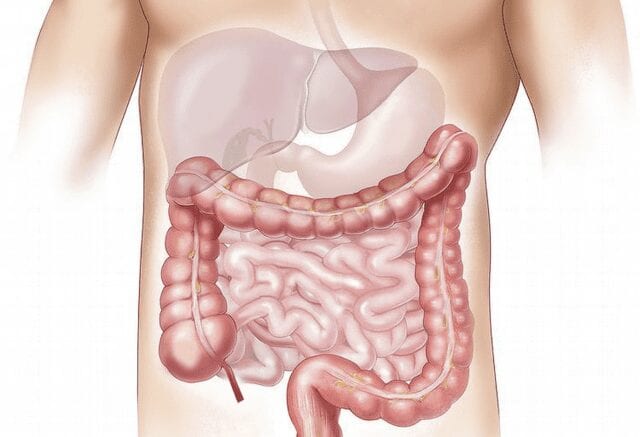 The structure of the liver is directly related to these functions. It is the largest organ in the body, weighing about 1.5 kg, 3-4 per cent of the total body weight. It has an excellent blood supply, receiving more blood per unit time than any other organ. In fact it has been calculated that the blood-flow through the liver is well over a litre per minute.

The liver might well be described as the body’s metabolic centre. As such, it must have a good blood supply from which it can draw its raw materials, and into which it can shed its products. Its blood supply is derived from two sources:

One of the remarkable things about the structure of the liver is that nearly all its functions are carried out by one type of cell, the liver cells. These are structurally undifferentiated, and all identical in appearance. They have no special structural features except numerous mitochondria and a prominent Golgi apparatus.

Microscopical examination of the liver shows an intimate association between the liver cells, blood and bile channels. In describing the structure of the liver, we must first understand that the liver is composed of numerous lobules roughly cylindrical in shape and approximately 1mm in diameter. Each lobule is filled with the liver cells arranged in rows radiating from the centre towards the periphery. Running alongside each lobule are branches of the hepatic artery, hepatic portal vein and bile duct. The first two are sometimes referred to as the interlobular blood vessels since they are located between adjacent lobules. In the centre of each lobule is a branch of the hepatic vein, referred to as the central or intralobular vein. The interlobular vessels are connected with the central vein by a system of capillary-like sinusoids that run parallel to, and come into close contact with, the chains of liver cells. The latter are surrounded by fine channels called canaliculi which connect up with the bile ducts at the edge of the lobule. So the liver cells bear an intimate association with the sinusoids on the one hand and the canaliculi on the other.

Blood reaches each lobule via the interlobular vessels: oxygenated blood arrives in the branches of the hepatic artery, blood rich in food materials in the branches of the hepatic portal vein. The blood then flows along the sinusoids towards the central vein. As it does so, the liver cells take up form the blood what they require, and shed their products into it. The only exception is the bile which is secreted, not into the sinusoids, but into the canaliculi whence it trickles to the bile duct.

READ MORE:  How to Identify Corynebacterium Diphtheriae from Throat and Mouth Specimens

Attached to the walls of the sinusoids are specialized kupffer cells, and of the reticulo-endothelial system. These cells are phagocytic, and their function is to destroy old red blood cells and to remove bacterial and foreign particles from the blood flowing through the liver. All other functions of the liver are carried out by the liver cells.

One of the many substances brought to the liver in its extensive blood supply is insulin which, as we have seen, controls its activities in relation to sugar. The pancreas and liver co-operate with one another in the homeostatic regulation of sugar. Such interaction between organs is fundamental to the homeostatic mechanisms of complex animals.