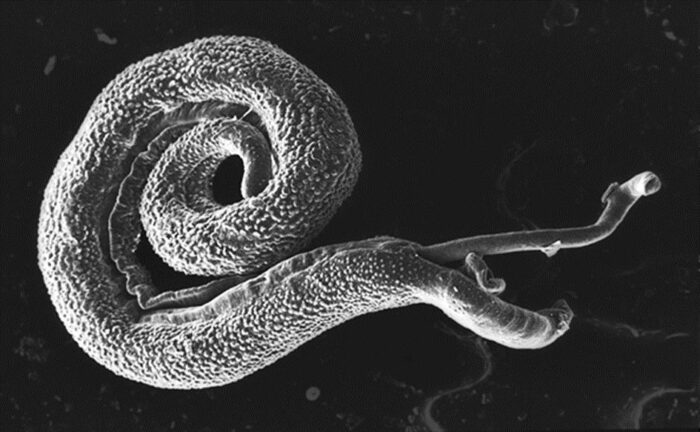 Trematoda is a subphylum of the Platyhelminthes. It contains two types of parasitic flatworms known as flukes.

Most trematodes have a complicated life cycle that involves at least two hosts.

They are mollusk and vertebrate internal parasites.

The primary host, where the flukes reproduce sexually, is a vertebrate. A snail is typically used as an intermediate host for asexual reproduction.

Biodiversity and taxonomy of Trematodes

Trematodes or flukes are made up of 18,000 to 24,000 species that are divided into two subclasses. Almost all trematodes are mollusk and vertebrate parasites. The smaller Aspidogastrea, which includes about 100 species, are obligate mollusk parasites that can also infect turtles and fish, including cartilaginous fish. The majority of trematodes, the Digenea, are obligate parasites of both mollusks and vertebrates.

The Monogenea and Cestoda parasitic classes are sister classes of the Neodermata, a group of Rhabditophora Platyhelminthes.

Flukes are classified into two groups based on how they infect their vertebrate hosts.

They can also be classified based on the environment in which they live. Pond flukes, for example, infect fish in ponds.

Tissue flukes are parasites that infect the bile ducts, lungs, and other biological tissues. The lung fluke, Paragonimus westermani, and the liver flukes, Clonorchis sinensis and Fasciola hepatica, are all members of this group.

Blood flukes live in the blood at various stages of their life cycle. Schistosoma species are among the blood flukes.

Trematodes are flattened oval or worm-like animals that are usually only a few centimeters long, though species as small as 1 millimetre (0.039 in) have been discovered.

Their most distinguishing external feature is the presence of two suckers, one near the mouth and the other on the animal’s underside.

Trematodes have a tough syncytial tegument on their body surface that protects them from digestive enzymes in those species that live in the guts of larger animals. It is also the surface of gas exchange; no respiratory organs exist.

The mouth is located at the animal’s front end and opens into a muscular, pumping pharynx. The pharynx connects to one or two blind-ending caeca that run the length of the body via a short oesophagus. The caeca are themselves branched in some species. There is no anus, as in other flatworms, and waste must be ingested through the mouth.

Although nitrogenous waste is mostly excreted through the tegument, trematodes do have an excretory system that is primarily concerned with osmoregulation. This is made up of two or more protonephridia, one on each side of the body, which open into a collecting duct. The two collecting ducts usually connect at a single bladder, which opens to the outside through one or two pores near the animal’s tail.

The brain is made up of two ganglia in the head region, from which two or three pairs of nerve cords run down the body. The ventral surface nerve cords are always the largest, while the dorsal cords are only found in the Aspidogastrea. Trematodes lack specialized sense organs in general, though some ectoparasitic species do have one or two pairs of simple ocelli.

Most trematodes are hermaphrodites, meaning they have both male and female organs.

Blood flukes are the only trematodes that are not hermaphrodites, or have both male and female sexes.

Finding a mammal host to act as an intermediate host to support their nutritional needs is required for sexual reproduction of blood flukes.

Trematode reproductive systems typically consist of two testes located posterior and dorsal to the ventral sucker. Having sperm ducts that connect on the underside of the animal’s front half. The structure of this final part of the male system varies greatly between species, but may include sperm storage sacs and accessory glands, in addition to the copulatory organ, which is either eversible and referred to as a cirrus, or non-reversible and referred to as a penis.

Normally, there is only one ovary. It transports eggs into an oviduct. The oviduct’s distal portion, known as the ootype, is dilated. It is linked to a number of vitelline glands on either side of the body that produce yolk cells via a pair of ducts. The egg’s shell is formed after it has been surrounded by yolk cells by the secretion of another gland called Mehlis’ gland or shell gland, the duct of which also opens in the ootype.

The ootype is linked to an elongated uterus that opens to the outside through the genital pore, near the male opening. Sperm cells, which are most commonly found in trematodes, travel through the uterus to reach the ootype, where fertilization occurs.

The ovary is sometimes associated with a sperm storage sac and a copulatory duct known as Laurer’s canal. Laurer’s canal is described as the primitive vagina, but in some species it is a vestigial organ. In some cases, it can act as an exit tube for potential waste products from the egg-formation system. 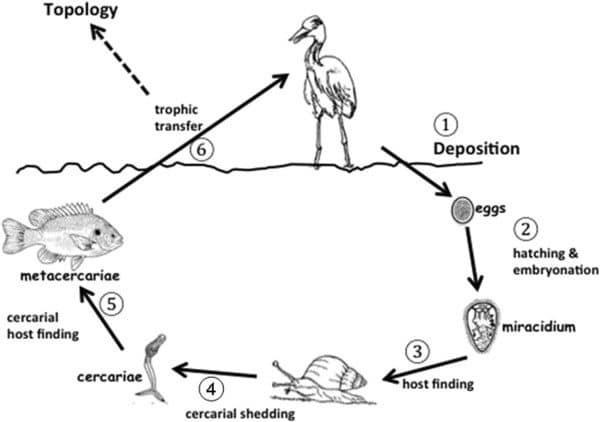 Trematodes have a very complex life cycle, and depending on which “taxa” they belong to, their life cycles can be completed with as few as one host rather than the standard three hosts.

Almost all trematodes infect mollusks as the first host in their life cycle, and the majority have a complex life cycle that includes other hosts.

Most trematodes are monoecious and reproduce both sexually and asexually. The Aspidogastrea, which have no asexual reproduction, and the schistosomes, which are dioecious, are the two main exceptions to this.

Eggs are commonly shed along with host feces in the definitive host, where sexual reproduction occurs. Eggs shed in water hatch into free-swimming larval forms (Miracidia) that are infective to the intermediate host and reproduce asexually.

Trematodes exhibit a wide range of forms throughout their life cycles. Individual trematode parasite life cycles may differ from those listed here. Along with the cystic and fully matured adult phases, they have five larval stages.

Trematodes are released as eggs from their definitive host and have evolved to withstand the harsh environment.

This infects the first intermediate host in one of two ways: actively or passively.

The first host is normally a mollusk.

As a free swimming ciliated miracidium with adaptations for recognizing and penetrating the first intermediate host, active transmission has adapted for dispersal in space.

Passive transmission has evolved to allow for time dispersal and infects the first intermediate host contained within the egg.

Infections with humans are most common in Asia, Africa, and Latin America. Trematodes, on the other hand, can be found anywhere untreated human waste is used as fertilizer.

Humans can become infected with trematodes by consuming raw or undercooked contaminated fish or plants, or by drinking contaminated water.

Trematode metacercariae attach to fish and plants. Furthermore, humans can become infected by certain species by swimming in contaminated water.

Schistosomiasis (also known as bilharzia, bilharziosis, or snail fever) is a parasitic disease caused by a trematode (platyhelminth infection, or “flukes”), a parasitic worm of the genus Schistosoma.

Trematodes are often classified medically based on which organ they infiltrate, which can include blood vessels, the gastrointestinal tract, the lungs, or the liver. Trematode eggs are frequently found in stool months after infection in many cases.

Ppraziquantel and Ttriclabendazole, depending on the type of infection, are used to eradicate trematodes in humans.

Humans are not the only creatures susceptible to trematode infection. They can infect dogs, cats, reptiles, and a wide range of other vertebrates.

Ruminants are among the most common trematode victims. Cattle and sheep, like humans, can become infected with trematodes by eating contaminated food.

When a ruminant is infected by a trematode, the infection leads to less milk or meat production, which has become an issue in cattle and other livestock industries.