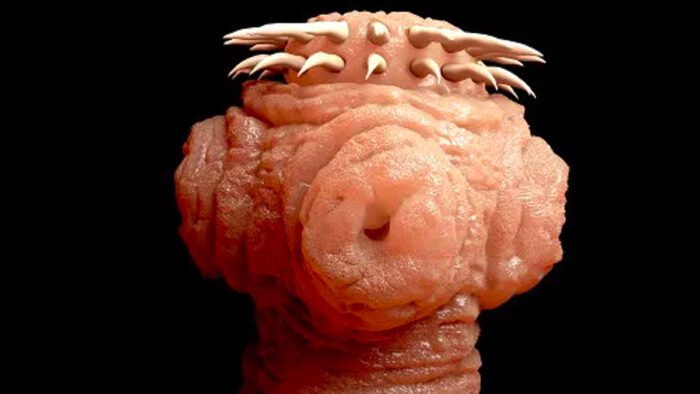 Taenia solium, also known as the pork tapeworm, is a cyclophyllid cestode in the Taeniidae family.

It can be found all over the world, but it is most common in countries where pork is consumed. It is a tapeworm that uses humans as its primary host and pigs as a secondary or intermediate host. It is passed on to pigs via human feces, which contain parasite eggs and contaminate their feed.

Pigs consume the eggs, which develop into larvae, then oncospheres, and finally infective tapeworm cysts known as cysticercus. Humans get the cysts from eating raw or undercooked pork, and the cysts grow into adult worms in the small intestine.

Human infection can be classified into two types. Taeniasis, or “primary hosting,” which is caused by eating undercooked pork, which contains cysts and results in adult worms in the intestines. This form is usually asymptomatic; the infected person is unaware that they have tapeworms. This type of tapeworm is easily treated with anthelmintic medications.

The other type, known as cysticercosis, is caused by eating food or drinking water contaminated with faeces from someone infected with adult worms, resulting in the ingestion of tapeworm eggs rather than cysts.

The eggs then develop cysts, primarily in the muscles, with no symptoms. However, some people experience obvious symptoms, the most dangerous and chronic of which is when cysts form in the brain. This form is more difficult to treat, but it is doable.

The adult worm has a white, flat, ribbon-like body that can grow to be 2 to 3 meters long. Its tiny attachment, the scolex, has suckers and a rostellum as attachment organs that attach to the small intestine wall. The main body is made up of a series of segments known as proglottids. Because tapeworms are hermaphrodites, each proglottid is little more than a self-sustaining, very lightly ingestive, self-contained reproductive unit.

Human primary hosting is best identified through microscopy of eggs in feces, which is frequently triggered by spotting shed segments. Imaging techniques such as computed tomography and nuclear magnetic resonance are frequently used in secondary hosting. Blood samples can also be tested using the enzyme-linked immunosorbent assay’s antibody reaction.

Solium has a significant impact on developing countries, particularly in rural areas where pigs are free to roam, because clinical manifestations are highly dependent on the number, size, and location of the parasites, as well as the host’s immune and inflammatory response. 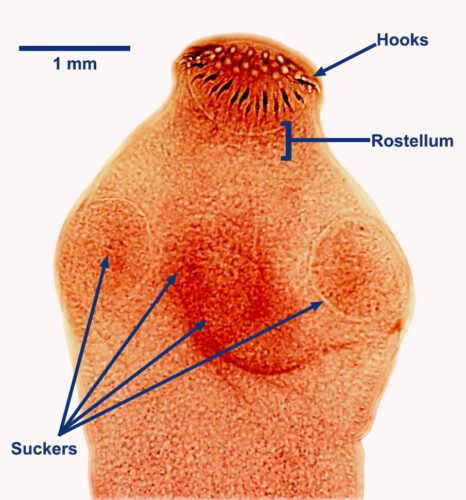 Solium is a triploblastic acoelomate with no body cavity as an adult. It is normally 2 to 3 m long, but can grow to be much larger, up to 8 m long.

It’s white and flattened into a ribbon-like shape. A scolex is a 1 mm diameter knob-like attachment organ (sometimes mistakenly referred to as a “head”) at the anterior end. The rostellum is surrounded by four radially arranged suckers on the scolex. These are the organs of adhesive attachment to the host’s intestinal wall. Two rows of proteinaceous spiny hooks adorn the rostellum. Its 22 to 32 rostellar hooks are classified as short (130µm) or long (180µm).

READ MORE:  Irritable Bowel Syndrome and Its Significance in Healthcare

The strobila, after a short neck, has an elongated body. The entire body is covered by a tegument, which is an absorptive layer composed of a mat of minute specialized microvilli known as microtriches.

Each mature proglottid, as a hermaphroditic species, has both male and female reproductive systems. A common genital pore is formed by numerous testes and a bilobed ovary.

The oldest gravid proglottids are densely packed with fertilized eggs, each of which is spherical and measures 35 to 42 m in diameter.

Fertilised eggs can mature using upper tract digestive enzymes if released early enough in the digestive tract and not passed, and the tiny larvae migrate to form cysticerci in humans. 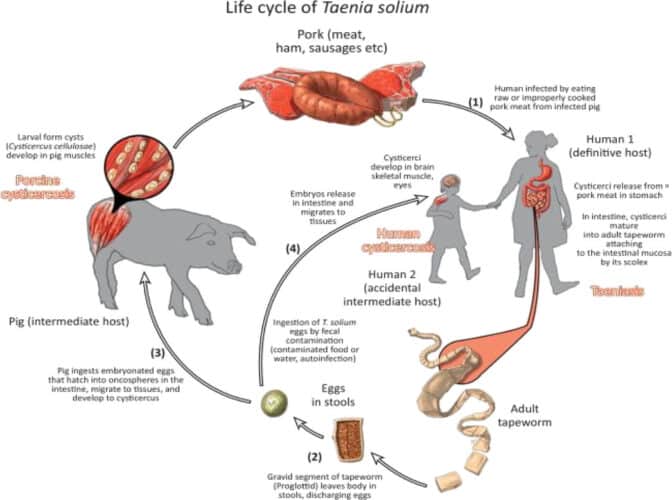 Solium’s life cycle is indirect, as it passes through pigs as intermediate hosts before entering humans as definitive hosts. In humans, the infection can be either short-lived or long-lasting, and if it reaches the brain, it can be fatal.

The eggs are released into the environment by humans and await consumption by another host. The eggs develop into oncospheres in the secondary host, which bore through the intestinal wall and migrate to other parts of the body, where cysticerci form. The cysticerci can live in the animal for several years.

Taeniasis is caused by adult T. solium infection of the intestine. It usually has non-specific or mild symptoms. This could include:

Such symptoms will appear eight weeks after the contraction, when the tapeworm has fully developed in the intestine (ingestion of meat containing cysticerci).

These symptoms could last until the tapeworm dies as a result of the treatment, but they could also last for many years, as long as the worm lives. T. solium infections are known to last for approximately 2-3 years if left untreated. Infected people may go years without showing any symptoms.

The best way to avoid tapeworms is to avoid eating raw or undercooked pork or vegetables contaminated with feces.

Furthermore, sanitation and the prevention of faecal contamination of pig feeds play an important role in prevention.

Infection can be avoided by properly disposing of human feces around pigs, thoroughly cooking meat, or freezing meat at 10 °C for 5 days. Dirty hands are thought to be the primary cause of human cysticercosis, which is especially common among food handlers.