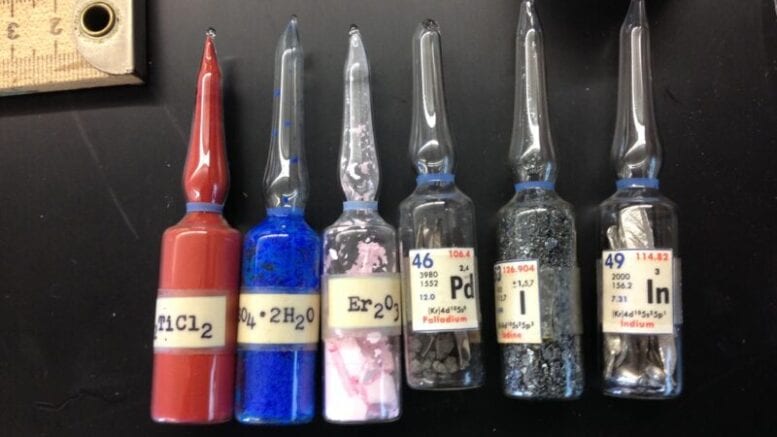 Solutions of AIEt3 and TiCl4 in a hydrocarbon solvent react exothermically to form a brown solid. This is the important Ziegler – Natta catalyst for polymerizing ethane (ethylene) to form polythene. Ziegler and Natta were awarded the Nobel Prize for Chemistry in 1963 for this work (Similar catalytic activity has been found from mixtures of Li, Be or Al alkyls with halides from Group 4, 5 and 6, the Ti, V and Cr groups).

Organometallic compounds can also be used as as catalyst. The AIEt3/TiCl4 catalyst is of great commercial importance. It produces stereoregular polymers (that is polymers where the molecules have the same orientation). These are stronger and have higher melting points than atactic or random polymers. Practically any alkene can be polymerized.

A large amount of work has been directed to how the catalyst works. The active species is TiIII and the AIEt3 can reduce TiCl4 to TiCl3 in situ or TiCl3 may be added instead. Then one of Cl atoms is replaced by an ethyl group. A possible mechanism is that the double bond in ethane attaches itself to a vacant site on a Ti atom on the surface of the catalyst. A carbon shift reaction occurs and the ethane migrates and is inserted between Ti and C in Ti – Et bond. This extends the C chain from two to four atoms, leaving a vacant site on Ti. The process is repeated and the C chain grows in length. A similar reaction occurs with other alkenes such as propylene CH3–CH=CH2. When the double bond attaches to Ti the CH3 group must always point away from the surface simply because the reaction occurs on a surface. Thus when the molecule migrates and is inserted into the Ti–C bond it always has the same orientation. This is called cis insertion of the alkene and explains why the polymers produced are stereoregular.

Polymerization of ethane was originally carried out using a high temperature and pressure. By using a Ziegler – Natta catalyst polymerization can be carried out under relatively mild conditions from room temperature to 93oC and from atmospheric pressure to 100 atmospheres. Eventually, the product is hydrolysed with water or alcohol ad the catalyst is removed. The polymer produced is called high-density polythene and has a density 0.95 – 0.97 g cm-3 and a melting point of 135oC. it has a molecular weight of 20 000 – 30 000 and consists of straight chains with very little branching. This form of polythene is relatively hard and stiff. Another  form of polythene called low-density polythene is much softer and has a lower density, 0.91 – 0.94 g cm-3 and a lower melting point of about 115oC. this consists of much branched chains and is produced by a free radical polymerization of ethane and a promoter under much more severe conditions (100 – 210oC and 1500 atmospheres pressure). Production of all forms of polythene was 24.6 million tones and of polypropylene 12 million tonners, both in 1991.

No stable carbonyl compounds are known. Ti(CO)6 has been formed using the matrix isolation techniques by condensing Ti vapour and CO in a solid matrix of inert gas at very low temperatures. It has been studied spectroscopically. The absence of carbonyls is probably due to the shortage of d electrons for back bonding.

Cyclopentadienyl compounds are much more stable and better known. In describing organometallic compounds it is convenient to describe the hapticity n of a group as the number of C atoms associated with the metal. Several stable bis(cyclopentadienyls) are known such as [Ti(n5-C5H5)2(CO)2]. [Ti(n5-C2H5)2(NR2)2] and [Ti(n5-C5H5)2(SCN)2]. The structures are roughly tetrahedral, but the cyclopentadienyl molecules are pentahaptic, that is five C atoms in wach ring are attached to Ti. Reduction of these compounds gives [Ti(C5H5)2 . X] or [Ti(C5H5)2]. The latter formula resembles ferrocene [Fe(C5H5)2]. But the structure of the Ti compound is dimeric and hence is different.

Tetra(cyclopentadienyl) compounds such as Ti(C5H5)4 can be made from TiCl4 and NaC5H5. The formula may be written [Ti(ŋ5-C5H5)2(ŋ1-C5H5)2], where two cyclopentadienyl rings are attached by five C atoms (π bonded) and two rings are attached by one C atom (o bonded) Nuclear magnetic resonance studies on these tetra(cyclopentadienyl) compounds suggest that in the ŋ1 rings the C bonded to Ti continually changes and also the ŋ5 and ŋ1 rings interchange their roles. Hf forms an identical compound, but rather surprisingly the Zr compound has three ŋ5 rings and only one ŋ1 ring.

Only a few alkyls and aryls are known and they are generally unstable in air and water. C6H5. Ti(C3H7O)3. CH3TiCl3 and Ti(CH2 . Ph)4 are stable at 10oC and Ti(CH3)4 is stable below -20oC. most compounds with an alkyl group attached to Ti will polymerize alkenes.

Some organometallic TiII compounds are able to fix N2 gas and produce NH3. One example is (C10H10Ti)2. This cycle could be similar to the dinitrogen fixation process in nature.