You Are Here: Home » Chemical Properties and Uses of Freons and Chlorofluorocarbons 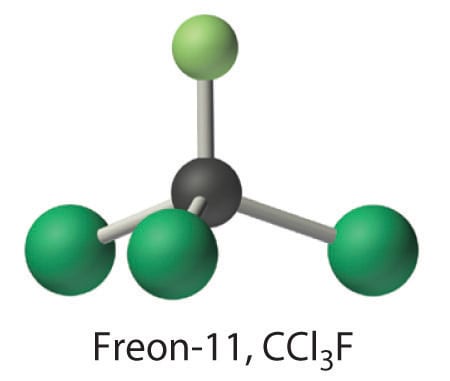 What are Freons? Freon refer to a non – combustible gas used in conditioning appliances. They are non – flammable refrigerants based on halogenated hydrocarbon including R-12 (Dichlorodifluoromethane), R-22 (Chlorodifluoromethane) R-23 (Fluoroform). Freons are ozone depleting refrigerants that undergo evaporation process over and over again to help produce cool air that can be circulated throughout your AC. 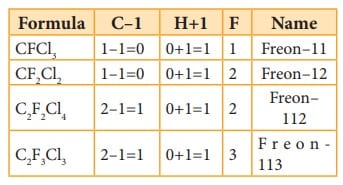 1. Freon-12 is stable:
Freon-12 does not disintegrate even under extreme operating conditions, however when it comes in contact with the flame of fire or an electrical heating equipment, it disintegrates, forming a toxic product. It is advised that we put all flames off and keep all doors open so it can escape into the atmosphere.

3. Miscible in oil:
Freon-12 is miscible with compressor oil under all operating conditions.

1. Low refrigerating effect
2. The CFC in Freon-12 has a high potential of causing depletion of the ozone layer.

READ MORE:  Contact Process In the Preparation of Tetraoxosulphate(VI) Acid

1. The boiling point of R-22 is -40.8°c/-41.4°F
2. Non-toxic
3. Non-flammable
4. Easily miscible with oil at condenser temperature, but at evaporator temperature it tends to get separated from the oil.

1. It has less side effect on the ozone layer.
2. Low compress displacement.
3. Greater water absorbing capacity.

It is a green house gas that contributes to the depletion of the earth’s ozone.

1. Used in the manufacture of Teflon.
2. Used in refrigerants.
3. Fire extinguishing agents.
4. Used in automobile conditioners.
5. Used in semi-conductor industries.

Chlorofluorocarbons are non-toxic, non-flammable chemicals containing atoms of carbon, chlorine and fluorine. They are used in the manufacture of aerosol sprays, blowing agents for foam,they are used as solvents and refrigerants. They are classified as halocarbons ( a compound containing carbon and hydrogen atoms).

1. It causes an increased incidence of cancer.
2. It damages the immune system.
3. It causes damage to the terrestrial and aquatic plant life.
3. Increased formation of ground level ozone.

So that’s a wrap up for freons today, drop your view or what you feel i missed out on in the comment section.

Activity Series and the Significance of Hydrogen