Biology is the study of life (Greek bios = life, logos = knowledge) which, in practice, means the study of living things. In most animals, the characteristics by which we know they are alive are self-evident: they move about, they feed, they reproduce, and they respond to changes in their surroundings.
These features are less obvious in plants and certain small animals; The main differences between living organisms and non – living objects can be summarized as follows:

Respiration is the ability of living organisms to break down food components especially glucose to release carbon dioxide, water and energy, it is a catabolic process.
This is the obtaining of energy as a result of chemical changes within the organism, the commonest of which is the chemical decomposition of food as a result of it’s combination with oxygen.

The elimination of these from the body of the organism is called excretion.
Excretion should not be confused with egestion or removal of undigested food from the intestine. This undigested food has not taken part in any of the organism viral chemistry and most of it has been affected by digestive fluids. Thus, although it’s removal is essential, it is not usually included in the term excretion.

READ MORE:  The Life Cycle and History of the Honey Bee

Nutrition is the ability of living organisms to take in food and mineral substance for anabolic process or body building.
This is an essential preliminary to respiration, since the energy comes ultimately from food. The feeding of a tree is much less obvious than that of an animal, which moves actively in search of food. Feeding also results in growth.

Strictly, growth is simply an irreversible permanent increase in weight/size of a living organism, but it usually implies also that the organism is becoming more complicated and more efficient. An illustration of this is an animal which changes from it’s larva to adult, for example, a frog or a butterfly.

An animal can generally move it’s whole body, whereas the movement of the higher plants are usually restricted to certain parts such as the opening and closing of petals, or to movement of parts as a result of growth. 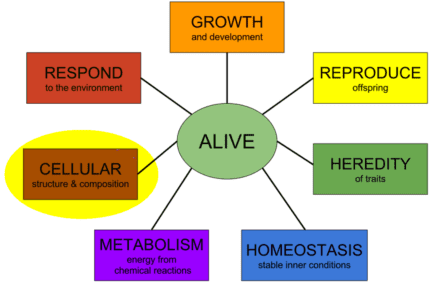 Reproduction is the ability of an organism to replicate or give birth to young ones of it’s kind.
Very few organisms have even a theoretically limitless life, but although individuals must die sooner or later their life is handed on to new individuals by reproduction, resulting in the continued existence of the specie.

Irritability is the ability to respond to stimulus. Obvious signs of sensitivity are the movements made by animals as a result of noises, or on being touched by or seeing an enemy. The more highly evolved an animal is, the greater the range of it’s sensitivity to phenomena as heat, light and chemicals is. Fully grown plants do not show such responses under casual observation, but during growth they respond to the direction of light, gravity and moisture.

This is a feature possessed by an organism which enables it to survive and withstand changes in it’s environment in order for it to be comfortable.

Every living thing die either naturally or accidentally.

This is the ability of living organisms to struggle for the necessities of life in order to survive in their various environments.

Differences Between Animals and Plants:

It must be remembered that both plants and animals have in common, to a greater or lesser extent, a the features listed above, but there are some fundamental differences between them, of which one of the most important is the method of feeding.

Animals take in food that is chemically very complicated (i.e composed of large molecules), it consists of either plant products or of other animals. This food is reduced into simpler materials by the process of digestion, and in this form can be taken into the body.
Plants, in general, take in very simple substances that are composed of small molecules, namely carbon dioxide from water, air and dissolved salts from the soil.
In their leaves they combine this carbon dioxide and water into sugar, using sunlight as a source of energy with which to effect this chemical buildup. From this sugar, and the salts taken in from the soil, green plants can make any of the substance needed for their existence.
The feeding of animals thus involves a breaking down process, while that of plants is a building – up, or synthesis.

The green color found in most plants is important for the absorption of sunlight and is due to chlorophyll, which is not present in any animal. (Plants like fungi do not possess chlorophyll)

Plants have a large quantity of substance called cellulose, which is never present in animal structures.

4) The cells of plants are rigid while that of animals are flexible.

5) Glucose is stored as starch in plants and as glycogen in animals.