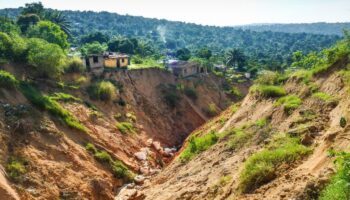 “Soil erosion is the natural process by which a field’s topsoil is carried away by physical sources such as wind and water.”

What exactly is Soil Erosion?

The soil particles are loosened or washed away in valleys, oceans, rivers, streams, or distant lands during this process. Human activities such as agriculture and deforestation have exacerbated the situation.

Soil erosion is a continuous process that can happen slowly or quickly. It causes a continuous loss of topsoil, ecological degradation, soil collapse, and other problems.

Let’s take a closer look at the causes, consequences, and prevention of soil erosion.

The following are the major causes of soil erosion:

Raindrops scatter the soil, which is then washed away by nearby streams and rivers. Soil loss is particularly severe in areas with heavy and frequent rainfall. The flowing water during floods also erodes a lot of soil by forming potholes and rock-cut basins, among other things.

Soil erosion is primarily caused by farming practices. Agricultural activities cause soil disturbance. The trees have been felled, and the land has been ploughed in preparation for the planting of new seeds. Because most crops are grown in the spring, the land is fallow during the winter. During the winter, the majority of the soil erodes.

Grazing animals eat the grasses and clear the land of vegetation. The soil is churned up by their hooves. They also pull plants out by the roots. This loosens the soil, making it prone to erosion.

To complete the logging process, a large number of trees are felled. Trees firmly hold the soil. The tree canopy shields the soil from heavy rainfall. During logging, the leaf litter that protects the soil from erosion is also lost.

Mining operations also disturb the land and make it more prone to erosion.

The flowing rivers and streams transport soil particles away, resulting in a V-shaped erosion activity.

The wind transports minute soil particles to distant lands during dry weather or in semi-arid regions. This degrades soil and contributes to desertification.

Soil erosion removes the soil’s top fertile layer. This layer is abundant in the nutrients that plants and soil require. Crop productivity is low because degraded soil does not support crop production.

Pesticides, insecticides, fertilizers, and other chemicals are found in agricultural soil. This pollutes the water bodies into which the soil drains.

Sediments accumulate in the water, raising the water level and causing flooding.

The dust particles combine in the air, causing pollution. When inhaled, some toxic substances, such as pesticides and petroleum, can be extremely dangerous. When the winds blow, dust plumes from arid and semi-arid regions cause widespread pollution.

Desertification is exacerbated by soil erosion. It converts habitable areas into deserts. Deforestation and destructive land use exacerbate the situation. This also results in biodiversity loss, soil degradation, and ecosystem disruption.

Soil sediment accumulation in dams and along their banks can reduce their efficiency. As a result, it has an impact on infrastructure projects such as dams, embankments, and drainage.

Soil erosion is a major environmental concern. Steps should be taken to address this issue. The following are some methods for preventing soil erosion:

It is the natural process of topsoil erosion, but human activity has accelerated it.

It is typically caused by the removal of vegetation or any activity that dries out the ground.

Soil erosion is caused by a variety of factors, including farming, grazing, mining, construction, and recreational activities.

Soil erosion causes more than just land degradation. It has resulted in a significant increase in pollution and sedimentation in rivers, which clogs the water bodies and reduces the population of aquatic organisms.

The health of the soil is critical for farmers and the population that relies on agriculture for food and employment.