To demonstrate Newton’s Law of cooling, we plot a temperature () time (t) cooling curve for hot water in a calorimeter placed in a draught. If R is the room temperature, then the excess temperature of the water is ( – R). At various temperatures, such as in a graphical illustration, we can draw tangents such as APC to the curve. The slope of the tangent, in degrees per second, gives us the rate of a fall of temperature, when the water is at the temperature :

We then plot these rates against the excess temperature, – R, and find a straight line passing through the origin. Since the heat lost per second by the water and calorimeter is proportional to the rate of fall of the temperature, Newton’s law is thus verified.

Besides the excess temperature, the rate of heat loss depends on the exposed area of the calorimeter, and on the nature of its surface: a dull surface loses heat a little faster than a shiny one, because it is a better radiator. This can be shown by doing a cooling experiment twice, with equal masses of water, but once with the calorimeter polished, and once after it has been blackened in a candle-flame. In general, for anybody with a uniform surface at a uniform temperature , we may write, if Newton’s law is true,

Where S is the area of the body’s surface, R is the temperature of its surroundings, k is a constant depending on the nature of the surface, and Q denotes the heat lost from the body.

When a body loses heat Q, its temperature falls; if m is its mass, and c its specific heat capacity, then its rate of fall of temperature, d / dt, is given by

Correction for Heat Losses in Calorimetry

Newton’s law of cooling enables us to estimate the lost in an experiment on the methods of mixtures. In doing the experiment, we take the temperature of the mixture at half-minute intervals, and plot it against time. The broken line shows how we would expect the temperature to rise if no heat were lost; we have therefore to estimate the difference, p, between the plateau of its imaginary curve, and the crest of the experimental curve, C. p is known as the ‘cooling correction’.

We start by drawing an ordinate CN through the crest, and another LM through any convenient point L further along the curve; OM should be not less than twice ON – the greater it is, the more accurate the correction. We next draw an abscissa O’PQ through the room temperature, R; and by counting the squares of the graph paper; we measure the areas O’CP (A1), PCLQ (A2). Then, if q is the fall in temperature from C to L:

To correct for the heat losses we must therefore add the correction p to the crest temperature on each side of the heat balance equation. In equation (1), p must be added to 2 in both numerator and denominator.

Theory of the Correction

To establish equation (3), we write down the expression for the heat lost per second from the calorimeter, assuming Newton’s law of cooling: 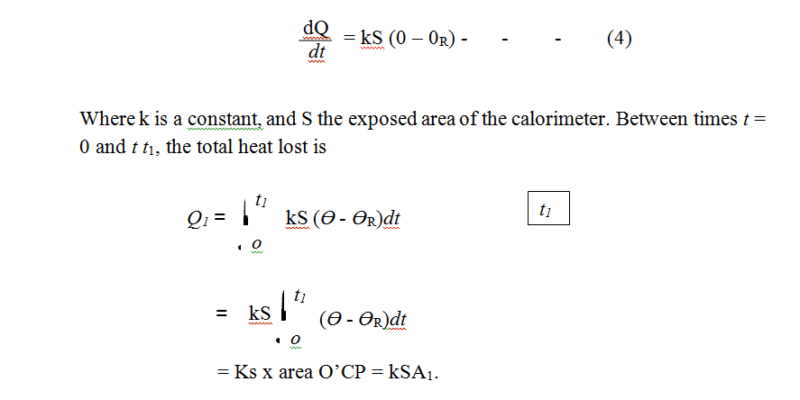 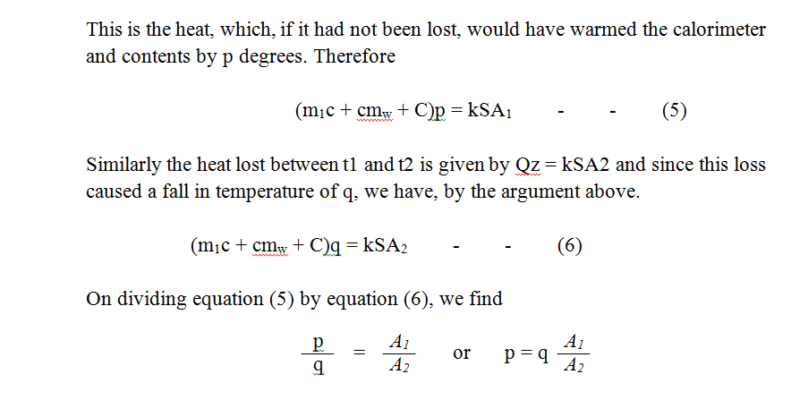 Specific heat capacities of liquids which react with water are often measured by the so-called method of Cooling. The cooling curve of a calorimeter is plotted, first when it contained a known volume of hot water, and then when it contains an equal volume of hot liquid. The volumes are made equal so as to make the temperature distribution, over the surface of the calorimeter, the same in each experiment. From the curves, the respective times t1 and tw are found the calorimeter and contents take to cool from 1 to 2. Whatever the contents of the calorimeter, it gives off heat at a rate which depends only on its excess temperature, since the area and nature of its surface are constant. Therefore, at each temperature between 1 and 2 the calorimeter gives off heat at the same rate whatever its contents. Thus the average rate at which it loses heat, over the whole rage, is the same with water and with liquid. Consequently,