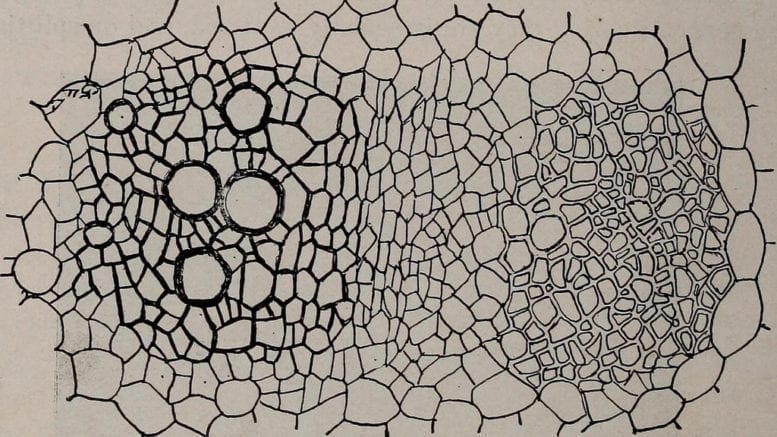 The word parenchyma means literally “poured in beside” and suggests the gap-filling capacity visualized by earlier histologists, who thought that the cells occupying the spaces between the more solid components of plant parts had been formed merely to fill them. This is far from the truth, since mature parenchyma is as much a functional tissue as any other. It can also be regarded as the foundation of the plant body, since all cells produced from the meristems and regions of regenerations go through stages of development when they possess characters similar to parenchyma cells. In the evolutionary series, it is certain that this cell form has come first; primitive plant structure bears testimony to this. Functionally, the various forms of parenchyma are capable of a wide range of purposes such as photosynthesis, food storage and secretion; all metabolic activity occurs in their protoplasts.

It is now usual to regard any mature but relatively undifferentiated or unspecialized cell as parenchyma, in contrast to the much more highly specialized epidermal, mechanical or conducting cells. Nevertheless, parenchyma may show specialization according to its position in the plant. For example, inner leaf tissues are highly specialized for photosynthesis and root cortex for food storage. At the same time, parenchyma cells retain their ability to change their nature according to the needs of the plant, and this they frequently do.

In the higher plants, parenchyma cells usually form fairly clearly-defined tissues, although they may be associated with groups of more specialized cells to form mixed tissues. This condition occurs in the vascular regions, where parenchyma cells form vertical and horizontal strands among the conducting elements. Pith and cortex of stems and roots, mesophyll of leaves, succulent or fleshy storage tissues of any sort are all examples of regions chiefly parenchymatous. However, where there is no clear distinction between parenchyma and other kinds of cell, since variation in shape, size and wall structure make it difficult make it to draw a sharp dividing line.

Parenchyma cells are extremely variable in shape. We may see them roughly isodiametric with many flattened or rounded faces. Alternatively, they may be considerably elongated along one axis to conform to the pattern of the so-called prosenchyma, a term applied to any elongated cells with tapering ends. The walls may be variously lobed or in fact, so great is the variation that it is nearly impossible to generalize. However, assuming that the tissues is derived from cubical, box –like initial cells, all equal in size and all differentiating such cell in the ideal case would possess fourteen faces, eight hexagonal in outline and six oblong. The condition under which adjacent cells differentiate rarely remain constant. The original cells are most often of unequal size; they are irregularly spaced, and they differentiate at different rates. Furthermore, intercellular space are of frequent occurrence in parenchyma, and they tend to cut down the number of cell contacts so that less than fourteen faces occur. Thus rarely, if ever, is the ideal shape achieved. However, in homogeneous parenchyma, the than the twelve which would occur if the initial cells were spherical. All parenchyma cells have a common characteristic. They all possess living protoplasts which have special feature related to the main function of the cell. For example, the actively photosynthesizing leaf mesophyll contain abundant chloroplasts. This feature is so characteristic that the tissues is frequently termed chlorenchyma. Storage cell contain various products of metabolism. Protoplasts of parenchyma cells are commonly interconnected from cell to cell by plasmodesmata through simple pits in the walls.

Parenchyma cell walls are most commonly thin, primary, cellulose walls with frequently pit markings. There can be considerable thickening of these primary walls however, particular in some storage organs, where hemicelluloses may be deposited in the cell walls as, e.g. the endosperm of the date palm. In parenchyma cells associated with vascular tissues, it is not unusual to find the walls with a secondary layer of lignified material forming sclerotic parenchyma, but the living contents distinguish them from the very similar sclerenchyma cells.

Parenchyma cells worthy of special mention are those which occur as the innermost layer of stem and root cortex in pterdophytes and spermatophytes, forming the endodermis. Endodermal cells are some-what elongated in the longitudinal axis. In the young endodermis of pteridophytes and angiosperms, only the radial walls are thickened by a narrow band of material composed of lignin or suberin or some related fatty substance. This band, the casparian band, completely encircles the cell in the tangential plane. A few cells remain unthickened and are called passage cells. In the transverse section, the bands appear as thickened zones on the radial walls. In older regions of an endodermis, the thickening may extend to other parts of the cells. In monocotyledonous angiosperm roots the endodermis is characterized by having thick cutinized and sometimes partly lignified walls. This thickening may be all over the cell or restricted to the radial and inner tangential walls only. Endodermal cell walls are considered to be impervious to water in the radial direction, but the occasional unthickened passage cells break the continuity. In some stems, the more characteristics endodermis may be replaced by a layer of cells containing prominent starch grains forming the starch sheath.

Another parenchyma cell layer in some stems and roots is the pericycle, a layer of cells inner to the endodermis, and clearly distinguishable from it by possessing no thickening of the walls. The pericycle may be regarded as the most external of the centrally-placed vascular tissues. Its special characteristic is that the cells retain their potentiality for further division after maturity, and certain outgrowth of roots and shoots have their origin in the in the pericycle. In appearance the cells are not much different from those of cortex or pith.

Gut Formation and the Phenomenon of Gastrulation?