There are two types of biogeochemical cycles and they are;

The gaseous cycle is a type of biogeochemical cycle in which the storage space or reservoir is the air or ocean. Cycles under this category are the oxygen cycle, carbon cycle, hydrogen cycle and nitrogen cycle. 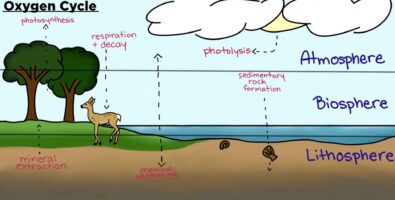 The oxygen cycle describes the movement of oxygen within the earth. Oxygen is produced by plants through a process called photosynthesis and it is also produced by the reaction of sunlight with water vapor.

Oxygen is used up in respiration, decomposition, rusting and combustion.

There are important steps that take place in the oxygen cycle and they are;

During the process of photosynthesis, plants take energy from the sun, carbon dioxide from the air, and water from the soil to make their food. The food produced is glucose. Oxygen is then released into the air as a by-product of photosynthesis.

During metabolism at night, plants take in oxygen and release carbon dioxide.

The oxygen released by plants is used by humans, animals, and other organisms for respiration. We make use of oxygen to break down simple sugars and produce energy to sustain ourselves. During the process of respiration, organisms take in oxygen and release carbon dioxide into the air.

These processes are being repeated continuously thus forming the oxygen cycle. 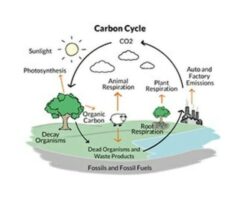 READ MORE:  The Formation and Structure of True Fruits

Carbon cycle consists of four important steps and they are;

Plants are able to make their food during photosynthesis. Photosynthesis is the process whereby plants convert light energy into chemical energy through cellular respiration.

During photosynthesis, plants make use of carbon dioxide gotten from the atmosphere.

In this process, animals die, decay and decompose and their remains are stored in the earth’s crust. Over a large period of time, the layers of sediment build up on each other thereby causing pressure and heat from within the earth’s crust, thus generating fossil fuels.

Respiration is the process of inhaling oxygen and exhaling carbon dioxide.

Animals rely on plants for food, oxygen and energy. Our cells require the presence of oxygen to break down the food we consume through a process called cellular respiration.

Once oxygen is taken in, carbon dioxide is released into the atmosphere where it is then utilized by plants. Nitrogen is an important element that is present in nature. It is needed for the growth of plants and enrichment of the soil. The nitrogen cycle refers to how the nitrogen elements present in the air are converted to a more usable form.

The nitrogen cycle consists of some very important processes that show how the conversion and utilization of nitrogen takes place.

Here are the steps involved in nitrogen cycle

Nitrogen fixation is the process whereby the nitrogen(N) present in the air is converted to ammonia(NH3).

During this process of nitrogen fixation, the nitrogen present in the air is converted into a more suitable form for the soil. A symbiotic bacteria which is known as  diazotroph, which happens to be present in the soil is responsible for this conversion.

Nitrification is the conversion of ammonia into nitrites and further into nitrates by nitrobacter. This is a very important process in the nitrogen cycle.

The assimilation process of the nitrogen cycle happens when plants take in the nitrogen made available in the soil.

Ammonification is the process of the conversion of the nitrogen present in organic matter to ammonium.

Denitrification is a process that involves the conversion of nitrite into atmospheric nitrogen. 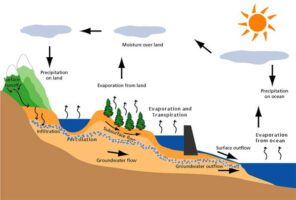 The water cycle, also called the hydrologic cycle or the hydrological cycle, is a biogeochemical cycle that describes the continuous movement of water on, above and below the surface of the earth.

Here are the steps involved in water cycling.

The first step to understanding the water cycle is knowing how the process of evaporation works. Water exists in three phases: solid, liquid, and gas. Evaporation is the process of water changing from a liquid form to a gas form.

Condensation is the process where water vapor turns back to liquid water.

When water evaporates into the atmosphere, it cools and turns back to tiny water droplets which in turn form clouds. When the clouds get  full, we enter the next step of the water cycle.

Precipitation is the process whereby any liquid or frozen water present in the atmosphere falls back to the surface of the earth.

Percolation is the movement of water through the soil.

Some amount of the water stays on the earth’s surface in reservoirs, lakes and oceans. Others seep down into the ground. It takes nine days to complete the water cycle.

Cycles under this category are the sulphur cycle, phosphorus cycle etc. 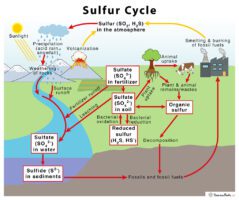 The sulfur cycle is a biogeochemical cycle in which sulfur moves between waterways, rocks, and living systems.

The following are the important steps of the sulfur cycle:

Elemental sulfur is formed when hydrogen sulfide oxidizes. The oxidation process is initiated by photosynthetic bacteria from the Chlorobiaceae and Chromatiaceae families.

Plants cannot directly utilize the element sulfur found in the soil. As a result, chemolithotrophic bacteria convert it to sulfates. 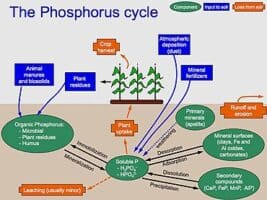 The biogeochemical cycle that describes the movement of phosphorus through the lithosphere, hydrosphere, and biosphere is known as the phosphorus cycle.

The following are the important steps of phosphorus cycle:

Phosphorus can be found in abundance in rocks. Because of this, the phosphorus cycle begins in the earth’s crust. The phosphate salts are extracted from the rocks. These salts are washed away into the ground and mixed with it.

Plants absorb phosphate salts that have been dissolved in water. However, the phosphorus content of the soil is very low. That is why farmers use phosphate fertilizers on their agricultural land.

Aquatic plants absorb inorganic phosphorus from the bottom layers of bodies of water. Because phosphate salts do not dissolve properly in water, they have an impact on plant growth in aquatic ecosystems.

The animals obtain phosphorus from plants or from plant-eating animals. When compared to rocks, plants and animals have a faster phosphorus cycle.

Return of Phosphorus Back to the Ecosystem:

When plants and animals die, microorganisms decompose them. The organic form of phosphorus is converted into the inorganic form, which is recycled to soil and water during this process.

Soil and water will end up in sediments and rocks, which will then weather and release phosphorus. As a result, the phosphorus cycle begins again.

These cycles demonstrate the way in which energy is utilized in the ecosystem.