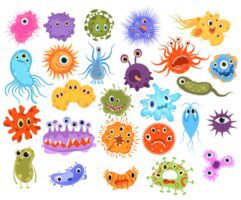 Microorganisms come in a variety of sizes and shapes, and they can be both beneficial and harmful to us.

Microorganisms can be found in and on the human body, in the air, in the food we eat, and even in the water we drink.

Bacteria, protozoa, viruses, and fungi (yeasts and molds) are the four major types of microorganisms.

Here are Some Benefits of Microorganisms Around Us

Through fermentation, microorganisms are used in the production of bread.

To bake the bread, yeast (Saccharomyces cerevisiae) is added to the dough.

The yeast uses the sugar present in the flour for this process, which contributes to the bread’s texture.

Microorganisms like bacteria aid in the fermentation process, which aids in the production of various dairy products from milk such as curd, buttermilk, butter, and cheese.

READ MORE:  Do People Still Play Board Games in This Digital Age?

The most common genus of bacteria used in the commercial production of this product is streptococcus.

Microorganisms are used in the fermentation process of alcohol.

Each drink is made from a different base ingredient, such as potato or grapes.

It is then fermented, distilled, and alcohol is produced.

Different types of fungus, such as yeast, are commonly used microorganisms here. Bacteria can also be used in beverages production.

An antibiotic a chemical that is used to treat bacterial infections and either kill or inhibit the growth of bacteria.

Antigens and enzymes from bacteria and viruses are extracted and used in the production of Antibiotics.

Microorganisms are used in the production of enzymes such as lipase, lactase, protease, and peptidase.

The most common microorganisms used in this process are; Propionibacterium freudenreichii, Pseudomonas denitrificans, Bacillus megaterium and Streptomyces olivaceus.

One of the most important natural roles of microorganisms is to aid in the decomposition process.

Microbes naturally aid in the breakdown of organic matter.

Biodegradation is the process by which microorganisms (primarily aerobic bacteria) decompose organic substances into simpler substances such as carbon dioxide, water, and ammonia.

During biodegradation, a chemical compound is transformed or eliminated by the biological action of living organisms.

Bacillus, a rod-shaped bacteria found in the gastrointestinal tract, binds to immune system cells and stimulates their division and reproduction.

A person’s body that lacks these beneficial gut bacteria will not have as strong an immune response to invading viruses.

These microbes may even aid the body’s fight against cancerous tumors.

Keep the Body in Shape

The human body is inhabited by millions of tiny living organisms, which, all together, are called the human microbiome.

These microbes play an important role in our body shape by helping us digest and ferment foods, as well as by producing chemicals that influence our metabolic rates.

Detoxification (detox)is the removal of toxic substances from a living organism. Just as humans breathe in oxygen and release carbon dioxide, microbes in and on us take in toxins and spare us their dangerous effects.

Microorganisms Are Used In The Fertilization of Soils

All these and more are why we need microorganisms in and around us.