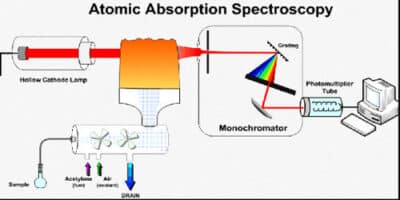 What is Atomic Absorption Spectroscopy?

AAS, or atomic absorption spectroscopy, is a technique for determining the concentrations of metallic elements in various materials.

Atomic Absorption Spectroscopy was invented by Alan Walsh in the 1950s for the qualitative determination of trace metals in liquids. The technique’s superiority over others is based on the fact that it can determine 50-60 elements without interference from trace to large quantities.

All of these elements, which fail to produce satisfactory results in flame photometry, can be detected here. As a result, it is a successful instrument for detecting and estimating metals and nonmetals, both types of factory pollution.

The technique has also proven to be extremely beneficial for both aqueous and non-aqueous solutions.

When a solution containing a mixture of metallic species is introduced into a flame, the solvent evaporates and metallic species vapour is produced. Some metal atoms can be raised to a sufficiently high energy level to emit metal characteristics radiation—a phenomenon used in flame photometry. A large number of metal atoms remain in the non-emitting ground state in this region.

These ground state atoms of a specific element are sensitive to light radiation with their own unique resonance wavelength. As a result, when this wavelength of light passes through a flame, a portion of it is absorbed, and this absorption is proportional to the intensity of atoms in the flame.

Because absorption is proportional to element concentration, the amount of light absorbed is determined in atomic absorption spectroscopy.

Atomic Absorption Spectroscopy has the following advantages over Flame Photometry:

The following are some of the disadvantages:

The instruments used in atomic absorption spectroscopy are as follows:

A hydrogen lamp is commonly used as a continuous source of radiation.

Burners are typically used to break the liquid sample into droplets, which are then allowed to enter the flame. The droplets are then evaporated, leaving the sample element in the residue. Flame is then used to decompose the residue. As a result of this process, the sample is reduced to atoms.

The radiation source for atomic absorption spectroscopy is a hollow cathode lamp.

It is made up of the following components:

(I) Cathode: is made of or coated with the element to be determined.

(ii) Anode A tungsten, zirconium, or nickel anode is used.

(iii) Depending on the wavelength of the emitted radiation, the window is made of Pyrex glass.

These gases have distinct line spectra.

These lamps are typically designed for single elements, but multi-­element lamps have also been designed for all purposes.

A hollow cathode lamp emits more than one composite line for each element, but the required spectral line can be separated using a monochromator with a low dispersion. The majority of lines are non-absorbing because they involve a transition that is not from the ground state. To provide maximum intensity, the most intense absorption line is chosen.

Inlet and exit slit widths of the monochromator should be narrow to isolate the particular line being used; the requirements depend on:

Since the major focus for the AAS process is Atomic ABSORPTION, the function of the monochromator is to allow the light not to get absorbed by the analyte atoms in the flame to reach the PMT.

Monochromators are typically of two types and they are;

If the element has a simple line spectrum, filters or slits are used to isolate the required spectral line. Filter photometers are used to measure potassium, sodium, calcium, magnesium, and other elements in samples.

Photomultipliers are commonly used as detectors. To compensate for source fluctuation, some instruments employ two filters and two detectors.