In the Bunsen’s ice calorimeter, the contraction due to the melting is measured, and from it the mass of ice melted is calculated. The apparatus used in carrying out the experiment consists of a test-tube T fused into a wider tube Y. the wider tube leads to a capillary C, and is filled with mercury from X to Y. the space above Y is filled with water from which all dissolved air has been boiled. Except for the capillary, the whole apparatus is placed in ice – water in the vessel V, and after some time, it all settles down to 0oC. A little ether is then poured into T, and air is blown through it via a thin tube; the ether evaporates and cools the tube T, so that ice forms on the outside of it. A pad of cotton wool is then dropped to the bottom of T and the apparatus is left for some more time, to allow the newly formed ice to settle down to 0oC

When the apparatus is ready for use, the end of the mercury thread in C is observed by a traveling microscope. If the specific heat capacity of a solid is to be measured, the specimen is weighed (m g) and left to come to room temperature . The solid is then gently dropped into the tube T. as it cools, it melts ice, and causes the mercury thread to run back along the capillary is a cm2, when the thread has ceased to move, its end is again observed. If is has moved through l cm, and the cross-section of the capillary is a cm2, then the contraction is al cm3. The mass of ice melted is therefore al/0.0907 g, and the heat absorbed is 334 al/0.0907 joules. Thus heat is given out by m g of solid cooling from to 0oC; the specific heat capacity c of the solid is therefore given by

Advantages of the Ice Calorimeter

The advantages of the bunsen’s ice calorimeter are:

An advantage sometimes asserted is that specimens can be added one after another, without having to re-set the apparatus. That is true, because each specimen comes to 0oC in turn, and then behaves simply like part of the apparatus, taking no heat from any following specimen. But it does not mean that the calorimeter has the advantage of speed – the time taken to set it up would be enough for half a dozen measurements by the method of mixtures. A disadvantage of its calorimeter is that it never settles down completely – the mercury is always slowly creeping along the capillary, and the creep during an experiment must be estimated and allowed for.

The calorimeter was devised in 1871; it is rarely used nowadays, because electrical methods of calorimeter are more convenient and accurate. However, it has been used for measuring the specific heat capacities of rare earths of which only small specimens were available.

The specific latent heat of evaporation of a liquid is the heat required to convert unit mass of it, at its boiling – point, into vapor at the same temperature. It is expressed in joule per kilogramme (Jkg-1), or with high values, in kj kg-1.

To find the specific latent heat of evaporation of water, we pass steam into a calorimeter with water. On its way the steam passes through a vessel, T in the figure, which traps any water carried over by the steam and is called a steam-trap. 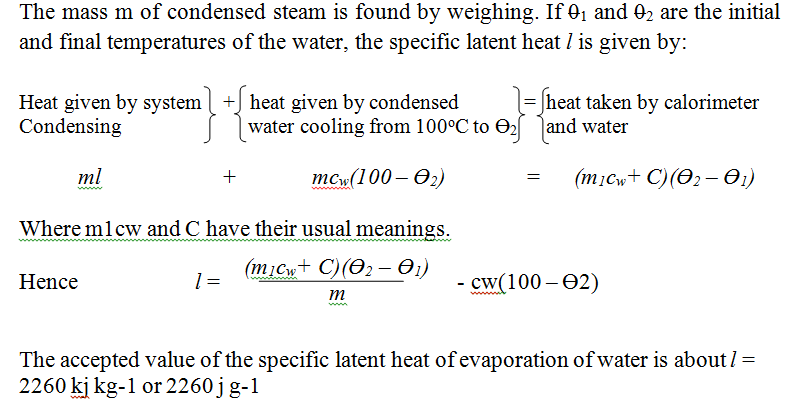 An apparatus suitable for use with liquids other than water was devised by Berthelot in 1877. The liquid is boiled in the flask F, and its vapor passes out through the tube T. this fits with a ground joint G into the glass spiral S, which is surrounded by water in a calorimeter. The vapor condenses in the spiral, and collects in the vessel V, where it can afterwards be weighed. Let

b = boiling – point of liquid. 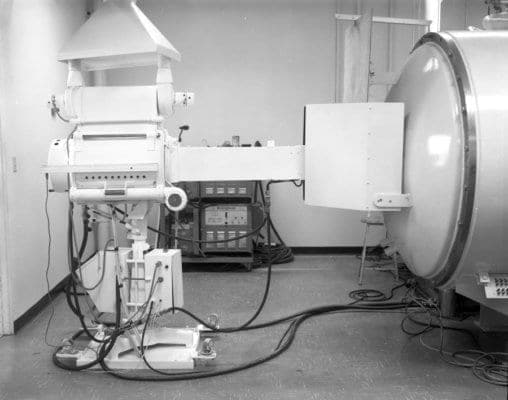