The standard heat of combustion of a substance, ΔH is the heat evolved when one mole of the substance is burned completely in oxygen under standard conditions.

The heat of combustion is an important quantity since the combustion of fuels forms the main source of energy for industrial and domestic purposes. The energy used by the living body is also obtained from the biological combustion of food. For practical purpose, the relative effectiveness of a fuel is expressed more often in terms of its calorific value which is the amount of heat evolved per kilogram of the substance. 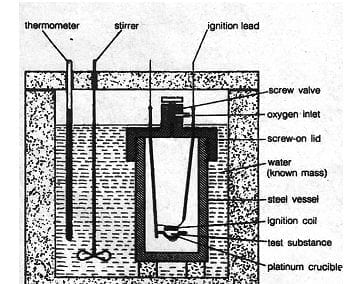 A bomb calorimeter is usually used for the accurate determination of the heat of combustion. It consists of a strong cylindrical steel vessel or bomb usually lined with enamel to prevent corrosion. A known mass (about a gram) of the test substance is placed in a platinum crucible inside is about 2 x 106 Nm-2 (20 atm.)

After closing the screw valve, the bomb is immersed in a known mass of water in a well-lagged calorimeter and left to attain a steady temperature. This initial temperature is measured using the thermometer in the calorimeter. The test substance is then ignition coil. The temperature of the water, which is stirred continuously, is recorded at 30-seconds intervals in order to find the maximum temperature attained. From the heat capacity of the whole system (two calorimeters, water, thermometer and stirrer), the temperature rise and the heat generated by the ignition current, it is then possible to calculate the heat of combustion using the bomb calorimeter.

When an ionic solid dissolves in water, a two-step process occurs, where each step is accompanied by a heat change. These steps are as follows:

The resultant heat change of the two steps determines whether the dissolution is exothermic. It is known as the heat of solution.

Generally, when an ionic solute dissolves in a solvent, the overall heat change of the dissolution is as follows.

The extent to which the solute particles become separated and hydrated in aqueous solution varies with the relative amounts of solute and solvent. The two steps become complete only in dilute solution. If a concentrated solution is diluted, there will be a further heat change, the heat of dilution. This heat of dilution gradually decreases so that eventually, increasing the dilution produces no further heat changes. In practice, this occurs when there are 800 – 1 000 moles of water to 1 mole of solute.

The standard heat of solution is the amount of heat absorbed or evolved when one mole of a substance is dissolved in so much water that further dilution results in detectable heat change.

Standard heats of solution of some common solutes in aqueous solution.

Since solubility varies with temperature, a substance which

Some solutes, when added to water, will react with the water molecules to form entirely new products which then dissolve to form an aqueous solution (chemical solution). For example,

The heat changes involved in such reactions would include the heat of the reaction between water and the solute, and the heats of solution of the new products.