Simple harmonic motion (S.H.M.) occurs when the force acting on an object or system is directly proportional to its displacement x from a fixed point and is always directed towards this point. If the object executes S.H.M., then the variation of the displacement x with time t can be written as 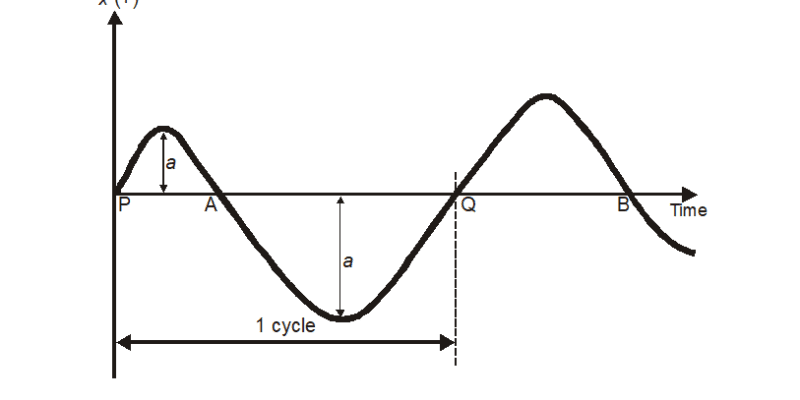 Here a is the greatest displacement from the mean or equilibrium position; a is the amplitude, Fig. 25.1. The constant ω is the ‘angular frequency’, and ω = 2πf is the frequency of vibration or number of cycles per second. The period T of the motion, or time to undergo one complete cycle is equal to 1/f, so that ω = 2π/T.

The small oscillation of a pendulum bob or vibrating layer of air is a mechanical oscillation, so that x is a displacement from a mean fixed position. Later, electrical oscillations are considered. x may then represent the instantaneous charge on the plates of a capacitor when the charge alternates about a mean value of zero. In an electromagnetic wave, x may represent the component of the electric or magnetic field vectors at a particular place.

It is shown that the sum of the potential and kinetic energies of a body moving with S.H.M. is constant and equal to the total energy in the vibration. Further, it was shown that the time averages of the potential energy (P.E.) and kinetic energy (K.E.) are equal; each is half the total energy. In any mechanical oscillation, there is a continues interchange or exchange of energy from P.E. to K.E. and back again.

For vibrations to occur, therefore, an agency is required which can possess and store P.E. and another which can possess and store K.E. This was the case for a mass oscillating on the end of a spring. The mass stores K.E. and the spring stores P.E.; and interchange occurs continuously from one to the other as the spring is compressed and released alternately. In the oscillations of a simple pendulum, the mass stores K.E. as it swings downwards from the end of an oscillation, and this is changed to P.E. as the height of the bob increases above its mean position.

In practice, the amplitude of vibration in simple harmonic motion does not remain constant but becomes progressively smaller. Such a vibration is said to be damped. The diminution of amplitude is due to loss of energy; for example, the amplitude of the bob of a simple pendulum diminishes slowly owing to the viscosity (friction) of the air.

The general behaviour of mechanical systems subject to various amounts of damping may be conveniently investigated using a coil of a ballistic galvanometer. If a resistor is connected to the terminals of a ballistic galvanometer when the coil is swinging, the induced emf due to the motion of the coil in the magnetic field of the galvanometer magnet causes a current to flow through the resistor. This current, this current, by Lenz’s Law, opposes the motion of the coil and so cause damping. The smaller the value of the resistor, the greater is the degree of damping. The galvanometer coil is set swinging by discharging a capacitor through it. The time period, and the time taken for the amplitude to be reduced to a certain fraction of its original value are then measured. The experiment can then be repeated using different values of resistor connected to the terminals.

It is found that as the damping is increased the time period increases and the oscillations die away more quickly. As the damping is increased further there is a value of resistance which is just sufficient to prevent the coil from vibrating past its rest position. This degree of damping, called the critical damping, reduces the motion to rest in the shortest possible time. If the resistance is lowered further, to increase the damping, no vibrations occur but the coil takes a longer time to settle down to its rest position. Graphs showing the displacement against time for ‘underdamped’, ‘critically damped’, and ‘overdamped’ motion are shown in the figure above.

When it is required to use a galvanometer as a current-measuring instrument, rather than ballistically to measure charge, it is generally critically damped. The return to zero is then as rapid as possible.

These results, obtained for the vibrations of a damped galvanometer coil, are quite general. All vibrating systems have a certain critical damping, which brings the motion to rest in the shortest possible time.