You Are Here: Home » Application of Pyrometry in High Temperature Measurement 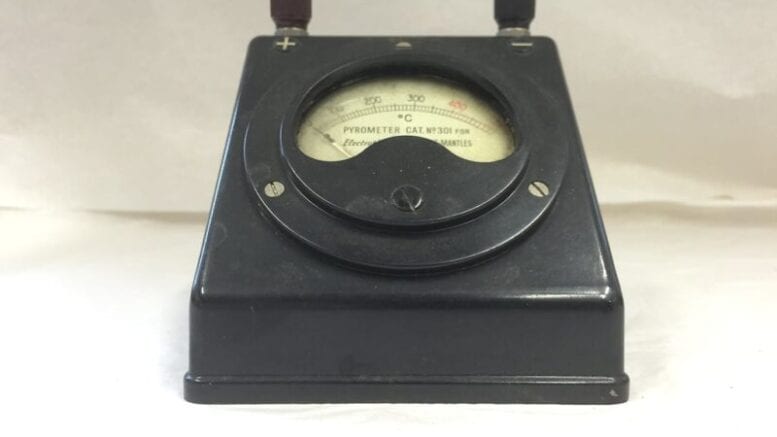 Pyrometry is the measurement of high temperatures by observing the radiation from the hot body. There are however other methods which are sometimes used in this kind of high temperature measurement such as the insertion of a number of ceramic cones of slightly different compositions into the furnace. The melting points of these cones increase from one to the next by about 20C. The temperature of the furnace lies between the melting points of adjacent cones, one of which softens and collapses, and the other of which does not. The temperature of steel, when it is below red heat, can be judged by its color, which depends on the thickness of the oxide film upon it. Temperatures below red heat can also be estimated by the use of paints, which change color at known temperatures.

Comparison of Pyrometers: How the Temperature of the Sun is Determined

In Pyrometry, the Total Radiation and Optical Pyrometers agree within the limits of experimental error 1/2C at 1750C, about 4 at 2800C. The choice between them is decided solely by convenience. The International temperature scale above the gold point (1063.0oC) is defined in terms of an optical pyrometer.

READ MORE:  Definition and Application of Hooke's Law of Elasticity

The range of a radiation pyrometer can be extended by cutting down the radiation admitted to it. A disc from which an angle, θ radians has been cut out is rotated in front of the pyrometer, so that the radiation entering is cut down in the ratio θ/2π. The pyrometer then indicates a temperature T1, which is less than the true temperature T2 of the source. The temperatures T are expressed in K to simplify the calculation which follows.

In this way, the surface temperature of the sun has been estimated. The value found agrees with that estimated from the wavelength of the sun’s most intense radiation which is about 6000K.

A sectored disc can be used to extend the range of an optical pyrometer, but the calculation is more difficult than for a total radiation pyrometer.

READ MORE:  How to Measure the Partial Pressure of Atmospheric Water

How to Operate a Gasoline Engine and Generator