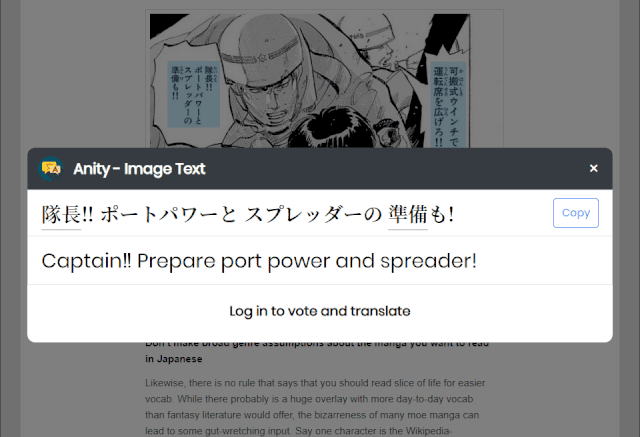 Anity is a new browser extension for the Google Chrome web browser that translates Japanese manga to English in the browser.

If you like manga, you may have noticed that most manga is in English. While an ever increasing selection of manga gets translated into various languages, most manga remains in Japanese.

Tip: check out Kana for Android to learn Hiragana and Katakana.

Anity comes to the rescue. The Chrome extension is designed to provide non-Japanese speakers with options to read Japanese-language manga. It uses machine and user translations for that and works in the following way.

Visit a webpage with a manga that is in Japanse. Click on the Anity icon in the Chrome address bar and select translate from the list of options that the menu that opens lists. Use the mouse to select the image that you want the extension to analyze.

You will notice a loading symbol on top of the image; this symbol indicates that the extension is in the process of analyzing the image.

It should identify all text parts of the image automatically. These text bubbles are highlighted so that you know that they have been identified.

Click on any of these to display the translation in an overlay on the screen. Repeat the process for any other text bubble that Anity identified to read the English translation of the text.

READ MORE:  How to Use Mxtoolbox to Check DNS Records of Domains

Some of the Japanese characters may be underlined in the text overlay. You may click on these to look up more information about these characters which may be useful if you learn Japanese as it allows you to look up characters that you are unfamiliar with.

Anity works really well when it comes to the translation of Japanese manga into English. I’m not proficient enough to judge the quality of the translation but it is likely that you should expect it to be understandable for the most part but with errors.

READ MORE:  How Websites Use 'Dark Patterns' to Trick You Online

The process of selecting images for translations is somewhat cumbersome if you want to read an entire manga on a website as you have to repeat the process for each image on the page. It would be better if the extension would either detect all images automatically or introduce an hover option to make things more comfortable.

All in all though, it is an excellent option for non-Japanese speakers who are interested in manga. The extension should work in other Chromium-based web browsers as well.