Ammonium Nitrate (NH4NO3) is a white crystalline solid substance that is formed from an acid-base reaction of ammonia and nitric acid. HNO3 + NH3 = NH4NO3. Although it doesn’t form hydrates, it is highly hygroscopic as a solid and soluble in water. 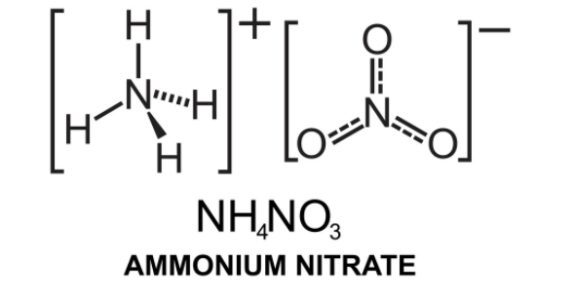 However, due to the dangers its solid state poses when heated, badly stored or mixed with fuel, Governments of numerous countries have placed strict regulations on its usage, storage and movement to prevent it from getting to the wrong hands and being misused.

In the preparation of ammonium nitrate, ammonia is in its anhydrous form while nitrous acid is in its diluted form.

First of all, You will need a litmus paper PH test strip to ascertain when the quantities of the two substances are in proper proportions.
Pour the nitric acid into a neutralizer and dip the litmus paper PH test strip in it. It will have a red colour indicating that the liquid it is in is acidic. Then keep adding ammonia into the neutralizer until the litmus strip turns purple, meaning the two substances are now in proper proportion and the chemicals have attained alkalinity, any other addition after this stage is a waste.

After proper proportions of both chemicals have been mixed, you have to heat It and allow the excess water to evaporate.
After evaporation, 83% of ammonium nitrate solution is obtained and further concentrated to obtain 95% solution in a vacuum concentrator.

It is also highly soluble in water and its dissolution in water is highly endothermic.

Ammonium chloride is stable and highly hygroscopic. It absorbs water from the atmosphere and decomposes when exposed to temperatures above 200°C.

Ammonium might be a major component of explosives, but it isn’t an explosive. It can only blow up when mixed with fuel oil and other components. 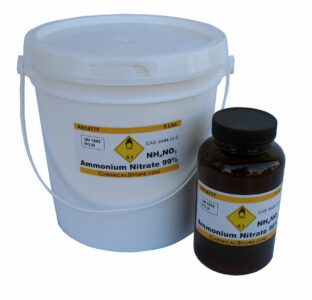 1. It serves as a high-nitrogen fertilizer.

Its efficacy has led to 21.6 million tonnes of it produced globally in 2017.

2. It is a major component in the production of explosives which are used in mining and breaking rocks.

READ MORE:  Principles of Nuclear Fusion in the Making of a Hydrogen Bomb

3. It is used as a component in freezing mixtures.

4. It is used in antibiotics and yeast as a nutrient.

5. It is used as a component in insecticides and herbicides.

6. It is used in the production of nitrous oxide.

7. It is used in producing pyrotechnics. Ammonium Nitrate is a chemical with a history of destruction. But despite being an oxidizer, it can’t explode on its own except when mixed with other components or if its temperature is raised above proper proportion.

Ammonium Nitrate has caused explosions that have killed a lot of people over the years.
Its latest strike was one of the largest non-nuclear explosions in history that hit Lebanese capital Beirut, on August 4, 2020, leaving at least 130 people dead, 5,000 injured, 30,000 people homeless.
The authorities involved had blamed this tragic incident on the 2,750 tons of ammonium nitrate which was laying In an abandoned warehouse in the capital at that time, although it is still unclear what led to its detonation.

The initial white-grey smoke which indicates white ammonium nitrates fumes and subsequent red-brown smoke comprising of nitrous oxide shown in one of the footage confirms the fact that ammonium nitrates were the reason behind the tragic occurrence.

READ MORE:  What is Chemistry and Its Applications

An explosion in a warehouse in Tianjin, China which claimed 116 lives was also caused by the chemical.

And before then there have also been numerous explosions with its cause attributed to this chemical.

Like the 1921 explosion in Germany’s opal plant which claimed 565 lives and the massive explosion in 1947 in New York City, Texas on a ship carrying fuel and ammonium nitrate which led to the death of 600 people which included everyone on that ship, 5,000 injuries and the destruction of 500 homes.

Despite its synthesis in the 1600s, ammonium nitrate wasn’t used as a component in explosives until the 1st World War when it was mixed with TNT.

However, ammonium nitrate can be safe if uncontaminated and properly stored but dangerous when mixed with fuel, mishandled or wrongly stored.
Large quantities of ammonium nitrate can trigger an explosion if stored without safety measured or exposed to heat.
The Higher the quantity, the higher the risk of explosion.

That is all we can take for Ammonium Nitrate, feel free to share our contents as well as drop a comment, if you have ever witnessed an ammonium nitrate explosion.