The world is an amazing place, but most times it could be filled with the most weird type of creatures. Today we will be talking about one of the bizarre weird looking sea creature known as the hammerhead shark. This shark is known for it’s weird head shape and eyes. We will also be looking at awesome facts about this shark.

If you have seen a shark or maybe a video of one, you would notice that a typical shark has 8 fins with the famous one being the first dorsal fin. The first dorsal fin enables the shark to swim comfortably and well balanced. The body of sharks also contain ‘pectoral fins’, which resides on both sides of their body. Now here is the difference steps in, It is very common for most sharks to have pectoral fins which are longer than their first dorsal fin, But in the case of the great hammerhead shark it’s quite the opposite.

During a study back in the year 2016, some cameras was attached to 5 different hammerhead shark, base on the result, the hammerhead sharks spent about 90% of their swimming tilted on one side which was said to around 48 to 76 degrees.

READ MORE:  Habit, Habitat and Morphology of the Dogfish

2) There Are 10 Species Of The Hammerhead Shark

We have seen lot of animals, mammals, birds, e.t.c go extinct due to they being threaten by humans or climate changes. If nothing is done we might experience the extinction of 3 hammerhead species. This endangered species are commonly killed by fishermen or traps set by the fishermen.

READ MORE:  The Chemical Nature of Organizers as Explained by Spemann and Mangold 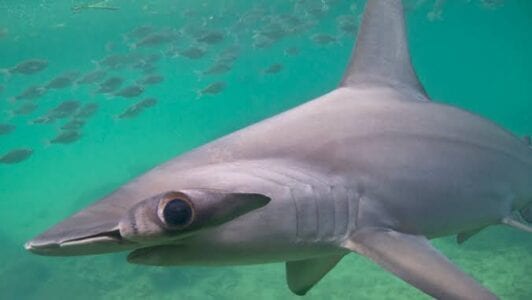 5) They Reproduce Once A Year.

READ MORE:  Morphological Affinities of the Chordates and Echinoderms 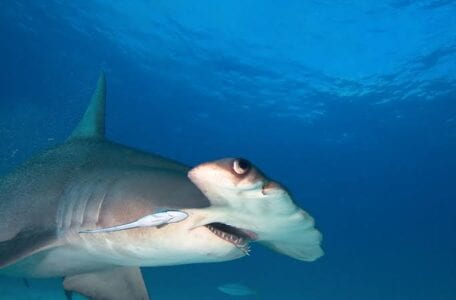 6) They Reside in Both shallow and Deep Waters

It is stated that the hammerhead shark can reside both shallow deep waters. They also dwell in cool shallow waters, this is because when a hammerhead shark is exposed to sun, it causes it’s body to tan.

7) They Have White Belly

The hammerhead shark’s white belly serves as an advantage to this predator, as it could easily blend into the ocean and attack it’s prey, when they least expect it.

8) They Are Good At Hunting

This are our top 8 facts on the hammerhead shark, do ensure you drop a comment in the comment area, and share other amazing facts about this sea creature.