In addition polymerization, the monomers simply join together to form the polymer which has the same empirical formula as the monomer, but is of a higher molecular mass. The polymerization may be represented as follows:

The monomers must be simple, unsaturated molecules with double bonds, e.g.

Where X can be

Most monomers are derived from petrochemicals. The cracking process in oil refineries produces a number of unsaturated hydrocarbons. Of these, ethane, CH2CH2, is the most important (the group, CH2 = CH- was formerly known as vinyl). Polymers made from ethane or its derivatives are called vinyl-type polymers. 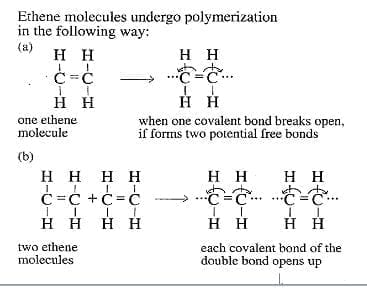 Poly(ethene): If ethane is subjected to a high temperature of about 250oC and pressure above 1500atm, together with traces of oxygen (as an initiator), it polymerizes into poly (ethene). This polymer, which is also known as polythene, can be represented as [CH2 – CH2]n, where n = 1000 to 10 000.

READ MORE:  Some Basic Properties of the Halogens - Group 17

Low density poly(ethane) is used in making a wide range of products. The most important ones are plastic bags, bottles, kitchen wares, and transparent films for packaging garments and foodstuff. It is also used as wire and cable insulators because of its insulating properties. 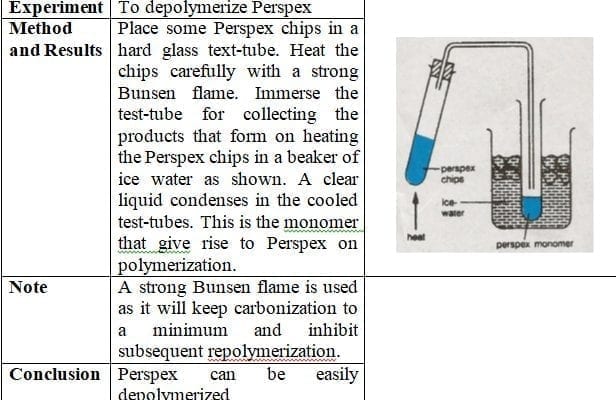 Poly (phenylethene): Another good product of Addition polymerization commonly known as polystyrene, poly(phenylethene) is made from the monomer phenylethene (or styrene) by refluxing, using a solution of benzoyl peroxide as catalyst. 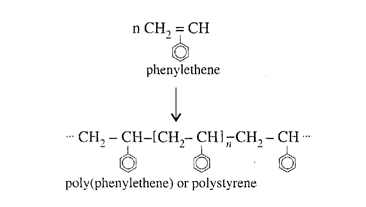 Polystyrene is a clear transparent plastic which is hard but brittle. When air, coupled with a foaming agent, is blown into heated polystyrene, it expands into a light, white, opaque solid that floats in water. This is known as expanded polystyrene or Styrofoam.

Polystyrene is used for making see-through containers and lighter fixtures since it is a good electrical insulator. Expanded polystyrene is used as ceiling tiles and lamp shades because of its lightness. Due to its high compressibility, it is widely used as packing materials or as shock absorbers for fragile objects during transportation. It is also used for making disposable cups and food containers, especially in fast-food shops.

Perspex: This is another product of addition polymerization. If the disubstituted ethane, methyl 2-methyl-propenoate, is heated, it polymerizes to give poly(methyl 2-methypropenoate) or PMMA for short. This material is commonly known as Perspex. An organic catalyst, lauryl peroxide, is used in this process.

Perspex is a strong, hard, transparent thermoplastic with a glossy surface. Because of its glasslike appearance, it is often used as a replacement for glass. Unfortunately, unlike glass, it is easily scratched. 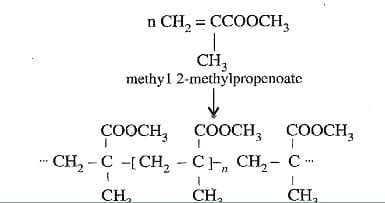 Poly(propenonitrile) is used chiefly for making textile. It is spun into threads and used for making woolly garments. One such material is popularly known as Orlon.