You Are Here: Home » A Complete Description of the Structure of a Root 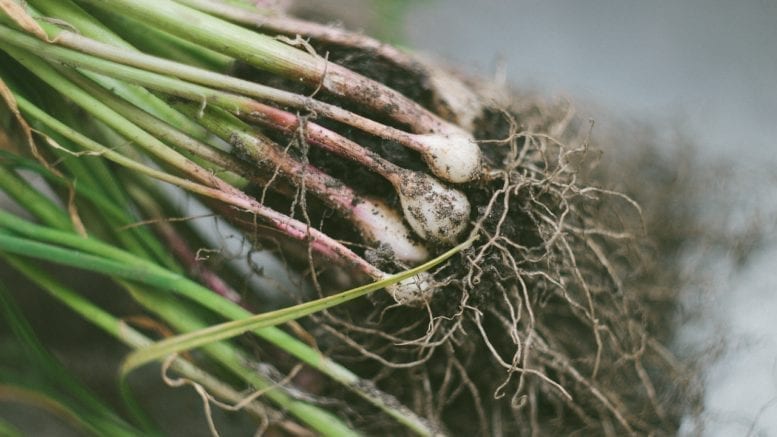 To understand how roots take up water we must first examine their structure. Basically there is a surface layer of epidermal-type cells on a root, and a central core of vascular tissues. The two are separated by turgid parenchyma cells tightly packed but separated in places by small water-filled intercellular spaces. The vascular tissues are enclosed within a layer of somewhat specialized cells, the endodermis. On account of the fact that these cells contain numerous starch grains (easily detected by staining sections of root with iodine), the endodermis is referred to as the starch sheath.

The cells at the surface form the piliferous layer, so-called because it is covered with root hairs. When fully formed the root hairs are about 4mm long, each being a slender outgrowth from a single cell. The piliferous layer is only present in the younger parts of a root, some 2 or 3mm behind the apex. As the root gets older and increases in girth, the piliferous layer ruptures and sloughs off leaving the outermost layer of parenchyma cells, the epiblem, to become the functional outer layer.

UPTAKE OF WATER BY THE ROOT

The main function of the root hairs is to anchor the plant to the soil, but they also participate in the uptake of water. Slender and flexible, they penetrate between the soils particles and absorb from the intervening spaces. To aid this they lack a cuticle and are numerous: their great number increases the surface area over which absorption can take place. A considerable amount of water is also absorbed beyond the root hair zone towards the apex of the root. Here the surface cells have no cuticle, and water is absorbed directly from the surrounding soil water.

Water is drawn into the root hair mainly by osmosis. On account of the presence of sugars and other metabolites, the concentration of solutes in the sap vacuole is greater than that of the surrounding soil water. Water molecules are therefore drawn across the cellulose wall and the semi permeable protoplast into the vacuole.

From the root hair water passes to the vascular tissues in the centre of the root via the intervening parenchyma cells. There are three possible pathways through which the water might flow: Through the sap vacuoles, water being drawn from one vacuole to the next by osmosis (vacuolar pathway).

1. Through the cytoplasm, water flowing from cell to cell via the plasmodesma strands (symplast pathway).

2. Along the between the cells walls, water flowing through the cellulose of adjacent cells and through the small intercellular spaces between them (apoplast pathway).

The vacuolar pathway would require an osmotic gradient across the root, the osmotic potential being more negative in the cells towards the centre of the root than in those further out. However, wilts such a gradient is theoretical possible, it has never been demonstrated, and in any case the resistance to water flow by the protoplasts would be too high to account for the known rates at which water is taken up into the roots.

Movement of water through the symplast and apoplast would be possible if the water potential was lower in the centre of the root than further out. Such a gradient is believed to exist, the water potential being comparatively low in the vascular tissues because of the high concentration of solutes there. Of the two alternatives, the apoplast pathway is considered the most likely because it would offer least resistance to the flow of water. It is believe that the evaporation of water from the leaves would lower the hydrostatic pressure in the leaf cells, resulting in a mass flow of water through the plant.

We come to the question of how water passes from the parenchyma cells into the vascular tissues of the root. A possible hypothesis is that the relatively low water potential developed in the leaf cells as a result o transpiration results in water being drawn into and along the vascular tissues. In other words the prime force moving water into the vascular tissues of the root is a ‘pull’ exerted by the leaves. However, this cannot be the whole story. If the stem of a plant is severed, the cut end of the stump will exude copious quantities of water for a considerable time, suggesting that there is a force pushing water up the stem from the roots. This is called root pressure. The forces involved can be measured by attaching a suitable mercury manometer to the cut end of a stem. in this way it has been found that sizeable pressure can be set up by the roots of some plants: a stump of Fuchsia, for example, can develop a pressure of over 90 kN/m2.

In the face of these observation it would be difficult to deny the existence of root pressure, but what is it due to? Here again we cannot be sure, but there are reasons for believing that it might be caused by the endodermis. The endodermis cells are unique in possessing a Casparian strip, a band of corky material which runs round each cells are plasmolysed the cytoplasm pulls away from the cellulose but remains stuck to the Casparian strip. Unlike the rest of the cell wall (cellulose), the Casparian strip is impermeable to water. What are the implications of these observations? It means that when water reaches the endodermis, it cannot enter vascular cylinder via the radial and horizontal walls of the endodermis cells. It must pass through the cytoplasm.

It has been suggested that the endodermis may actively secrete salts into the vascular tissues. This would create a relatively negative osmotic potential in the vascular tissues, resulting in water being drawn into them by osmosis. If this is true the root would be behaving like the osmometer. The Casparian strip would restrict water movement through the cell walls and prevent outward leakage of salts from the vascular tissues. There is as yet no proof that the endodermis works in this way, nor do we know how important such a process might be in the normal uptake and transport of water.

Whatever its cause, root pressure is certainly an active process involving the expenditure of energy. This has been shown by treating roots with a metabolic poison: under these circumstances the exudation of water from the cut stem ceases. Similar results have been obtained by depriving the roots of oxygen or lowering the temperature. The endodermis cells contain numerous starch grains, and these may provide a source of carbohydrate for supplying the necessary energy.

READ MORE:  Coelomate Evolution and Advances in the Complexity of the Arthropoda
SHARETWEETPINSHARE

The Mechanism of Translocation and Active Transport