The skull is a complex structure made up of many bones, and the dog’s skull isn’t an exception. A dog’s skull serves as a protective shield for organs like the brain, where the abilities to sniff, playing, hearing, track following are found and it also provides a framework for the face. Dogs are regarded as “hard-headed” animals because their skull is pretty thick. The skull of a dog varies, as does its size, shape and breed.

There are three basic skull types of dogs

The Bones of the dog’s skull are divided into two major parts; Cranium Bones and Facial Bones. 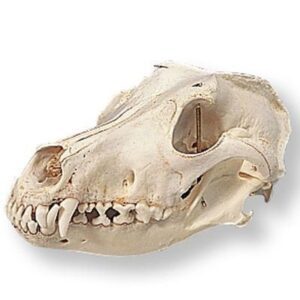 These are bones that house the brain and serve as a shield for other sense organs.
Examples of the Cranium Bones in the skull of a dog include; occipital bones, frontal bones, temporal bones and parietal bones.

Occipital officially called occiput, contains a wide opening called the foramen magnum and is divided into two major parts – the basilar and the squamous parts.

The basilar part which is also known as the basioccipital is wide, roughly rectangular and joins with the tympanic bulla on either side.
It is a forward and upward extension from the foramen magnum.

While the squamous part also known as the supraoccipital is a large division that joins with the parietal bone before birth in a dog. It also forms a dorsal border of the foramen magnum and holds the cerebrum of the dog. The occipital of bone has numerous variations.

This is an irregular, flat, and even bone that makes up the basis of the frontal region.
It has a narrow nasal which is located between the maxilla and nasal bone.
It also makes up the adjacent part of the face and helps to form the entire roof of the skull. 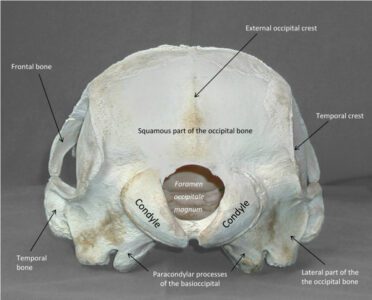 The Temporal Bone houses the structure responsible for the sense of hearing in a dog.
It also contains the squamous, tympanic and petrosal parts in it.

The squamous part of the temporal bone has a curved zygomatic process that extends half of the zygomatic bone and forms its arch.
The tympanic part can be easily identified by its significant component called the bulla tympanic.
The jugular foramen is located between the petrosal part and the occipital bone.

Parietal Bones forms the dorsolateral wall of the cranium. Along with the caudal part of the frontal bone, it forms the temporal fossa which is the origin point of the temporalis muscle, a muscle involved in mastication.

READ MORE:  Differences Between The Ecosystem And Biomes

Facial Bones which consists of 36 bones, is best known to provide a protective cover for the eyes, respiratory and digestive pathways.

The Nasal Bone is a narrow and slender bone whose external surface differs in shape and size.
It is located towards the nose and is rostra on the skull.
The lateral borders of the nasal cavity are formed by the maxilla, caudally, the ethmoid, the vomer, and the palatine.

The Maxilla Bone is a very short but highly caudally bone that includes the alveolar processes to hold the brain motor and the motor teeth in the centripetal surface.

It also contains the infraorbital frame from which the intraorbital vein comes from.
Its upward extension is responsible for the formation of a large part of the size of the facial region of the dog.

Furthermore, it also contains a well-developed socket for the canine teeth of the dog and its nasal surface of the maxilla has several crests.

The Incisive Bone possesses a petite body and three processes, the alveolar process, the Palatine process, and the nasal process.
It has a dorsoventrally compressed body and it joins with the maxilla bone to form the invisivomaxilly suture.

READ MORE:  Microorganisms and Their Role in Our Health 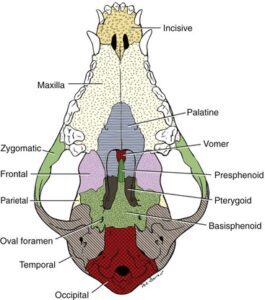 The Palatine Bone is divided into perpendicular and horizontal laminas.
The perpendicular laminae help to form the lateral wall of the meatus and it forms the medial barrier literally.
Meanwhile, the horizontal laminae consists of a nasal surface, free concave border and a palatine surface.
It also consists of a nasal crest that forms with the vomer bone.

The Lacrimal Bone of the skull of a dog is a bone with a triangular outline and pyramidal shape. It is located at the margin of the orbit of a dog.
It joins with the maxilla bone to form a lacrimomaxillary suture, and with the frontal bone to form a frontolacrimal suture.

The Zygomatic bone is a very long and strongly curved bone whose dorsal border is free rostrally and convex.
It joins with the lacrimal bone to form the lacrimozygomatic suture and has a transversely convex.

Get The Best Scholarship Information At SummitSpire