You Are Here: Home » 7 Hot Facts About the Pacific Ring of Fire 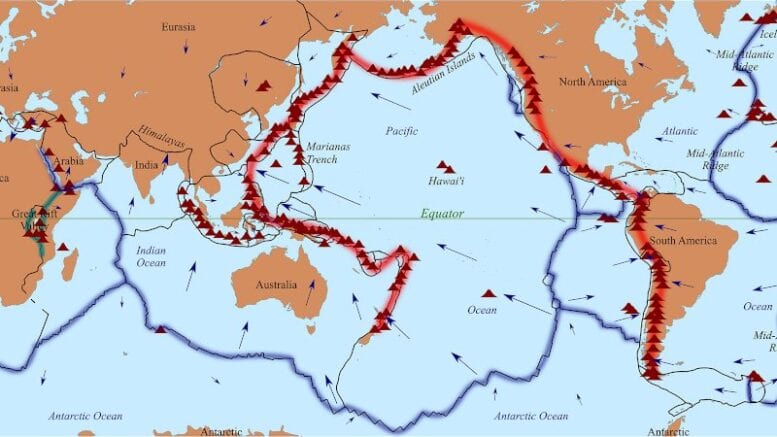 When the explorer Ferdinand Magellan visited Earth’s biggest ocean in 1520, he found the waters pleasantly calm. And that’s why — to this day — most people call it the Pacific Ocean, as “pacific” is a synonym for “peaceful.” However, the ‘Pacific Ring of Fire’ is a totally different enigma!

Oh, the irony. Magellan didn’t know it, but there’s a vast loop of volcanoes, trenches and seismically active places running through and around the Pacific. This would be the (in)famous “Ring of Fire.” (Pacific ring of fire). About 24,900 miles (40,000 kilometers) long, it’s where most of the world’s earthquakes and volcanic events take place. Here’s a seven-part crash course on the region as a whole. Spoiler alert: It’s got nothing to do with that Johnny Cash love song. Unfortunately.

More than 15 countries are pierced by this geologically interesting area known as the ‘Pacific ring of fire’. In the New World, it hugs the western coasts of South, Central and North America. Then it spans Alaska’s Aleutian Island Arc. From there, the ring invades Russia’s Kamchatka Peninsula before shooting through Japan. Next in line are the Philippines, Indonesia, Papua New Guinea and New Zealand. The ring completes itself down below in northwestern Antarctica, where a number of volcanoes are present.

You and I live on top of the Earth’s lithosphere, our home world’s rocky exterior. But this layer isn’t some rigid shell. Instead it’s divided into 15 to 20 tectonic plates that drift over molten materials deeper in the planet. Boundaries between them come in three major categories — and the Ring of Fire includes examples of each one. Let’s start with divergent boundaries. These occur when two neighboring plates move in opposite directions. Because they generate new crust (the outer portion of our lithosphere), they’re extremely important.

Under the ocean, the huge Pacific Plate is being pushed away from four of its counterparts by the powerful East Pacific Rise. The boundary’s northern tip stretches into the Gulf of California, putting it well within the Ring of Fire.

And up in California proper, we have the San Andreas Fault. That’s a classic transform boundary: an area where two plates sideswipe each other horizontally. California straddles the Pacific Plate and the North American Plate. The latter is headed south; the former’s moving north. Friction between them causes earthquakes, such as the 1906 San Francisco quake that killed about 3,000 people.

READ MORE:  Synapse, Acetylcholine and the Action of Drugs and Poisons

What happens when plates collide head-on? A convergent boundary, that’s what. At this very moment, the Nazca oceanic plate is being driven underneath the South American continental plate. The point of contact is called a “subduction zone.” Because the ocean plate isn’t going down smoothly, the convergence process sets off a lot of earthquakes in western South America. It’s also uplifting mountains and sending up the magma necessary for volcanoes.

Subduction zones can also appear where two ocean plates meet. Remember the giant Pacific Plate? Well right now, the Philippine Sea Plate is overriding a western portion of it. This interaction forged the Mariana Island Arc. It also created a yawning underwater chasm called the Mariana Trench. Part of a larger subduction zone, it contains the deepest point of any ocean on Earth. Called the “Challenger Deep,” that area’s floor lies 36,070 feet (10,944 meters) below sea level.

4. It’s Littered With Volcanoes and Prone to Earthquakes

National Geographic reported that there are some 452 active and dormant volcanoes spread out across the Ring of Fire (including plenty of submarine vents and fissures that erupt underwater). As far as we know, these account for 75 percent of all the world’s volcanic activity. Meanwhile, around 90 percent of the earthquakes on this planet occur in the Ring’s general area. Some of the worst natural disasters in recorded history — like the 1883 Krakatoa eruption, the Chile Earthquake of 1960 and the 2004 Indian Ocean tsunami — had their origins along its tectonic boundaries.

The Ring of Fire has been described as a “coincidence.” Really, it’s just a collection of independent plate boundaries that happen to exist around the same ocean. So when disasters break out on opposite sides of the ring, you can bet they’re unrelated. Case in point: A series of earthquakes rocked Japan’s Kyushu Island in April 2016. That same month, Chile suffered a quake with a Richter scale magnitude of 7.2.

Did one set off the other? Hardly. As the University of California, Berkley’s seismology lab pointed out, the epicenters were almost 10,000 miles (16,093 kilometers) apart. Although a strong earthquake can trigger weaker ones in nearby places, the gap between Chile and Japan is way too big for their quakes to be linked.

While we’re here, the evidence suggests volcanoes erupt independently of each other. Good to know.

Solar and wind power grab more headlines, but the Earth’s interior produces another renewable energy source. By harnessing natural hot water reservoirs, engineers can produce electricity without emitting greenhouse gasses. Potential geothermal energy reserves are often located around subduction zones, making this an attractive option for communities in the Ring of Fire. The United States, Indonesia, Japan, New Zealand, the Philippines and several other countries have long capitalized on the resource.

7. The Ring of Fire Could Help Set Up a Future “Supercontinent”

The Pacific is the world’s largest ocean — but how long will it retain the title? Due in no small part to all the subduction zones on its flanks, the Pacific might close within the next 250 million years. As Asia, Australia and the Americas converge, planet Earth may wind up with a new supercontinent, not too dissimilar from the giant landmass Pangea that started breaking apart around 200 million years ago. But that’s just one hypothesis. Some geologists think the Atlantic or the Arctic Oceans are more likely to disappear than the Pacific.

7 Hot Facts About the Pacific Ring of Fire