The detection and measurement of the various sorts of radiation associated with radioactivity is very important both for research purposes and in order to ensure that radiation does not build up to dangerous limits, for exposure to too much radiation is injurious. Detection and measurement methods depend, in principle, on the detection of charged particles. X-rays and y-rays, though not charged, can be detected because, when they pass through a gas, they eject electrons from the gas molecules and, therefore, form charged particles. Neutrons similarly, can be made to give rise to charged particles by collision with hydrogen atoms, for fast neutrons, or by collision with boron-10 or lithium-6, for slow neutrons. 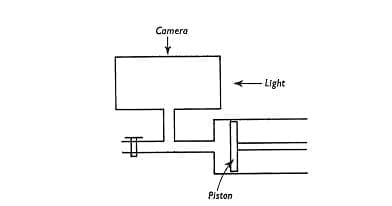 1. Cloud Chambers: Cathode rays cause the formation of a fog when passed through a supersaturated vapor by providing nuclei for condensation. Wilson, in 1912, designed a very important piece of apparatus, known as a cloud chamber, for making use of this phenomenon to make the paths of charged particles visible.

The space inside the cloud chamber contains, initially, dust-free air, saturated with water vapor. Sudden expansion of this air, brought about by the rapid movement of a prison, causes cooling so that the air becomes supersaturated. The passage of charged particles into the chamber, at this stage, leaves tracks, which can be photographed, along the paths of the particles.

Not only can the particular paths be followed, but the ranges and energies of the particles can be measured. An α-particle, being heavy, normally travels in straight lines, but β-particle are more readily deviated by collision with air molecules.

Collisions between particles, resulting in the formation of new particles. Can also be followed in the cloud chamber.

In recent modifications a cloud chamber can be made to operate automatically by the arrival of particular radiation at other suitably placed detectors. When used in conjunction with a magnetic field, provided by an external electromagnet, a cloud chamber shows the paths of  charged particles as curves. The direction of the curvature in relation to the direction of the magnetic field shows the sign of the on the particle, and the amount of curvature enables the speed of the particle to be calculated if its mass and charge are known.

2. Bubble Chambers: In bubble chambers, developed by Glaser, since 1952, a superheated liquid is used instead of the supercooled vapor of the cloud chamber. Charged particles now provide nuclei for the formation of bubbles within the liquid and the tracks of bubbles are denser than the tracks formed in a cloud chamber.

3. Geiger Counters: A Geiger-Muller counter consists, essentially, of a hollow cylinder with a thin, metal wire passing along its axis and insulated from the cylinder. The cylinder is filled with a mixture of gases at low pressure, the nature of the gases depending on the use of the counter. The cylinder, or cathode, can be earthed, whilst the central wire, or anode, can be raised to a potential of up to 1 kv.

Passage of a charged, or ionizing, particle through the gas in the cylinder enables a pulse of current to flow between the wire and the cylinder. Such a pulse can be amplified so that it can be recorded on a loud-speaker as a sharp click or on an automatic recorder which counts the number of pulses.

Many different forms of Geiger counter are available commercially, some being able to deal with counts of about 105 per second.

4. Scintillation Counters: The spinthariscope relied on the fact that fluorescence is caused when an α-particle falls on to zinc sulphide screen provided one of the earliest methods of detection.

Nowadays, precisely the same principle has been adopted in what is known as a scintillation counter. The flashes of light from a zinc sulphide. Or some other phosphor, are allowed to fall on to a cathode with a photo-sensitive coating. The flashes of light release electrons from this cathode, by the photo-electric effect. These electrons are accelerated from one cathode to another, releasing, at each cathode, an increasing number of electrons, until a pulse of current suitable for amplification is obtained. The device is known as a photo-multiplier and radiation up to a million per second can be recorded.

5. Photographic Emulsion Method: The passage of charged particles through a photographic emulsion shows up as a track on development. This method has been particularly useful in the study of cosmic rays.

6. Use of Semi-Conductors: The conductivity of some semi-conductors is greatly increased by exposure to electromagnetic and ionizing