You Are Here: Home » 4 Types of Nuclear Reactors Used in Power Generation 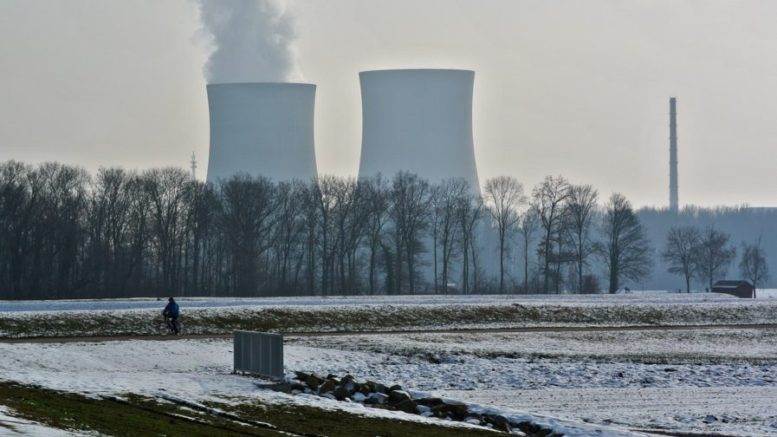 Atomic piles or nuclear reactors. The number of neutrons resulting from a single fission is known as the multiplication factor. When this is less than 1 a chain reaction is impossible; when greater than 1 a chain reaction might take place. In an atomic pile, or a nuclear reactor, fissionable material is so arranged that the multiplication factor can be carefully controlled.

These piles, or nuclear reactors, liberate energy, and also provide beams of slow or fast neutrons for research and industrial purposes, such as the manufacture of radioactive isotopes.

1. The Calder Hall, Magnox or Mark 1 Reactor: Is the commonest type of reactor, first operated commercially at Calder Hall in 1956, rods of natural uranium, containing both 238U and 238U atoms are used as fuel. They are placed in magnesium alloy (Maynox) cans within a block of very pure graphite, which acts as a moderator. This moderator is necessary to slow down the secondary neutrons resulting from fission of 235U atoms, and thus so ensure that as many secondary neutrons as possible cause fission of further 235U atoms and escape capture by the more plentiful 238U atoms.

The overall amount of uranium present must be greater than the critical size or else a chain reaction will never develop, but control is gained by incorporating control rods of some material, such as boron-steel or cadmium, which is a good neutron absorber. These rods can be moved up, out of the pile, or down into it. When they are partially withdrawn the multiplication factor exceeds 1, and the pile operates. The power produced can be changed by adjusting the position of the rods. Safety is achieved by having an automatic device which ensures that all the control rods move into the pile in any emergency.

The energy liberated as the pile operates is in the form of heat, and a stream of carbon dioxide, under pressure, is passed through to remove the heat, the resulting hot has being used to boil water, the steam from which can operate a steam turbine. The pile must be surrounded by concrete walls, several metres thick, to keep the amount of escaping radiation within safe limits. The concrete is referred to as a biological shield.

Besides liberating energy, the atomic pile also produces plutonium, as some of the secondary neutrons are captured by 238U atoms. This plutonium can be separated from the uranium by chemical means. It is required for defence purposes, in making bombs, and can also be used in fast reactors as described in d. below.

The advantage of Magnox design is that it uses natural uranium as the fuel. It is, however, big, partially because of the necessity for a graphite moderator. Moreover, the efficiency of the reactor is not very high. This is partly because the fission products which build up lower the efficiency, and this means that the fuel element have to be replaced periodically. This is a lengthy process and can only be carried out when the reactor is fully shut down.

READ MORE:  Uses of Gold-Leaf Electroscope and the Electrophorus

2. Advanced Gas-cooled Reactor (AGR or Mark II): The next stage in the development of Magnox nuclear reactors into more economic units is represented by the advanced gas-cooled reactor (AGR). Such a reactor has been in operation, at Windscale, since 1962. It has a graphite moderator and a carbon dioxide coolant, but the fuel elements consist of uranium oxide enriched with 235 The reactor operates at a higher temperature than the Magnox type, and the fuel life is longer.

AGR stations are at present being built at Dungeness, Hinkley Point, Hunterston and Hartlepool and these are planned to provide 5000 megawatts of electricity by 1974. Further stations at Heysham and Connah’s Quay are under consideration.

3. Steam Generating Heavy Water Reactor (SGHWR): In this type of reactor, uranium oxide pellets are placed in zirconium-alloy cans which are surrounded by heavy water as a moderator. Ordinary water is used as the coolant and some of it boils in the cooling process. The resulting steam is used to drive a turbine.

The first SGHWR was opened at Winfrith in 1969.

4. Fast Reactors: Magnox, advanced gas-cooled and SGHWR nuclear reactors are called thermal reactors because they use a moderator to slow down the neutrons. The slow neutrons are necessary to cause fission of further 235U atoms, but some plutonium is also formed by neutron capture by 238U atoms.

READ MORE:  How to Measure the Velocity of Sound in a Quincke Tube

The plutonium formed can itself be fissioned but only by fast neutrons. If plutonium is used as the fuel in a reactor, then, it is not necessary to use a moderator and the resulting reactor can be much smaller in size.

The first fast reactor was built at Dounreay and has been in operation since 1959. A central core of plutonium, from which the energy is liberated by fission, is surrounded by 238U. This uranium captures any neutrons that escape from the central core, and is converted into plutonium. It can be arranged, by careful design, that a rather larger number of plutonium atoms are formed in the surrounding uranium than are used up in the central core. This type of reactor, then, produces more ‘fuel’ than it actually uses. It is known as a fast or fast fission breeder reactor, because it relies on fast neutrons and because it ‘breeds’ plutonium from uranium 238.

The central core of plutonium produces energy more rapidly than a uranium-type pile, and the heat produced is removed by circulating a liquid metal, such as a alloy of sodium and potassium, or moltel sodium. As with uranium piles, biological shielding is necessary, and there is also a large metal sphere surrounding the whole to prevent escape of radioactive material in case of fire.

A second fast reactor is built at Dounreay and is designed to produced 250 megawatts of electricity when at full power.