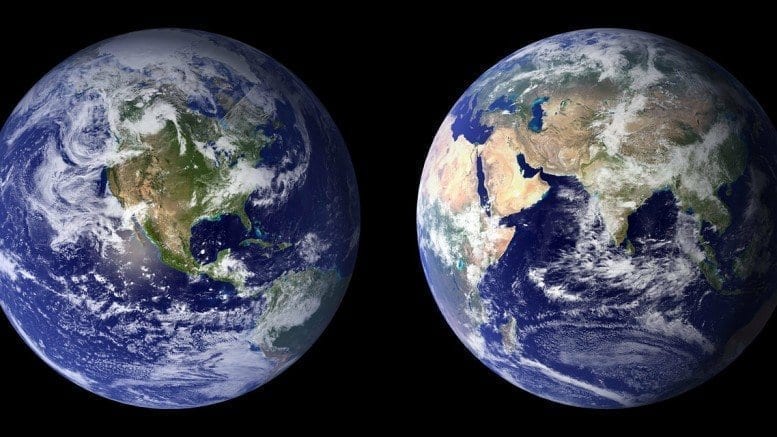 The Earth is home to a diverse species of living organisms, plant life and animals. Over 11000 species of bacteria have been identified and classified! This number excludes the vast number of other microbial life from viruses, protozoa to fungi and algae. All these living organisms dwell together with a host of aquatic and terrestrial lives that have their habitat both on land and in water.

In other to have a full grasp of the importance of planet earth, we must first examine its strategic location in the universe which gives it the lofty advantage of the only known and established life supporter. Here are 18 amazing facts about the strategic location of the earth in the cosmic space which have been divided into three segments for better clarity:- Thus, Strategic features of the Earth, Amazing facts about the earth and the earths satelite, rotation and revolution.

2. Earth’s Revolution: The revolution of the earth also known as (tilt) causes the annual cyclic changes in the seasons, regulating earth’s temperature and the development of vast climatic zones.

3. Earth’s Rotation: Its rotation also known as (spin) is responsible for the length of day and night. This perfection is needed such that no part of the earth would be exposed to sunlight or deprived of it at the detriment of other parts.

8 Amazing Facts About the Earth

7. The atmosphere helps in the distribution of radiations such as visible light and      heat which are essential to the survival of life.

8. The solar system travels around the Milky Way at an astonishing speed of 249km  per second!

The Marvels of Star Constellations
When we gaze at the sky especially on a cloudless and clear night we find to our amazement that some stars are so bright and they twinkle. Stars also Vary in color as they are either blue or red depending on the intensity of the light they emit. Interestingly, stars that emit a smaller amount of light and energy photons appear red in color while stars that give off an enormous amount of light, heat and energy appear blue. These variations in color are as a result of their ability give off their light and energy photons at different ends of the color spectrum. This explains why bright stars appear blue in color since they emit light of short wavelengths at the blue spectrum while less energetic stars emitting smaller amounts of energy give off their lights of long wave lengths at the red end of the color spectrum.

Why Do Stars Twinkle

One may want to ask, why do stars twinkle? The twinkling of stars can be explained by their ability to generate very high amounts of energies within their core. These high energy photons they generate migrate to the outer surface of the stars and radiates into space in the form of infrared rays and visible light. Our sun emits light in the greenish-yellow region but it does not appear green rather it appears as white light when viewed from space because it emits light in other visible wavelength regions. Stars therefore twinkle as a result of the distortions in the earth’s atmosphere. As light travels from space to reach us on earth there are considerable changes it undergoes due to reflections and the scattering light to the different spectra as it travels. The larger lights on the other hand are less distorted or disturbed and the planets too do not show any twinkling effects because they are much closer to us than stars
The earth’s atmosphere alters the suns appearance to varying degrees. These alterations are dependent on the time of the day or the location on earth. The sun appears as a bright or golden yellow star at mid day while it appears brick red in color during sunrise or at sunset. The changes we observe are attributable to the particles, gas molecules and water vapour present in the atmosphere.
The composition of the atmosphere enables it to scatter blue light thereby producing a fanciful blue sky on a very clear day. Furthermore, with the exclusion of blue and violet light from the visible spectrum of the sun, the remaining light that is seen is a golden yellow brightness. However, at sunrise or sunset the sun is at an angle and its light therefore travels more through the earth’s atmosphere where blue, green and violet light are scattered more leaving the sun to appear brick red or crimson in color.

The Brilliance of the Night Sky

The sense of sight perceptions of our eyes considerably influences our view of the sky at night. The cones and the rods of the eyes are designed to function during the day and at night respectively. The rods of the eye are extremely sensitive to light as a result their actions could be triggered by even a single photon of light. The sensitivity of our rods tends to lie more within the blue end of the light spectrum, thus we tend to see only the blue stars at night when we focus on faint stars of equal brightness. However, we are not limited by our naked eyes. There are considerable telescopes with very high resolutions that have been developed which can aid our view of objects at astronomical distances.

Even with the availability of high resolution telescopes, the atmosphere still compromises our ability to see cosmic elements such as the stars, comets, galaxies, planets etc. This hindrance has been mitigated by the development of the Hubble Space telescope (HST) which we would now turn to.

The Hubble telescope is an astronomical telescope launched into orbit that detects objects in space. The Hubble telescope has produced very remarkable images of objects in space including interstellar dust particles, galaxies and nebulae. The spectacular images brought back by the Hubble Space Telescope are a rich combination of scientific exploits and art. The monochrome images are passed through several color filters to produce a final image that suits a scientific description for research purposes or an image that closely reflects what the astronomers believe are the real colors of these cosmic elements.  However, there are new and innovative telescopes that have been developed recently which exceeds the performance of the HST in several ways. The Keck I telescope for instance is an advanced telescope with very high resolutions that can detect dust clouds given off by binary-star systems in a constellation known as Sagittarius which astronomers believe is near the central point of the Milky Way.