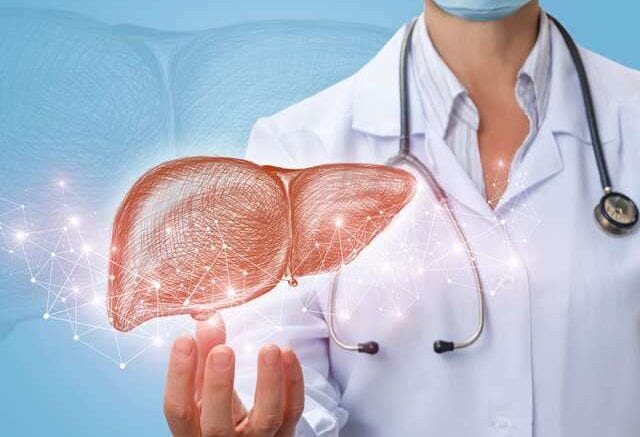 The liver is a large, reddish-brown organ which lies just below the diaphragm and partly overlaps the stomach. In addition to a supply of oxygenated blood from the hepatic artery, it receives all the blood which leaves the alimentary canal. It has many important functions, some of which are described below:

This organ is able to convert glucose, amino acids and other substances to an insoluble carbohydrate, (glycogen). Some of the glucose converted may be taken from the hepatic-portal vein carrying blood, rich in digested food, from the ileum to the liver. About 100g glycogen is stored in the liver of a healthy man. If the concentration of glucose in the blood falls below 0.1% (strictly, about 80mg per 100ml blood) some of the glycogen stored in the liver is converted by enzyme action, into glucose and it enters the circulation. In this way the blood leaving the liver in the hepatic vein and entering the general circulation has a sugar concentration which does not normally fall below 0.1%.

Bile is partly an excretory product and is formed continuously in the liver. It’s alkalinity and salt content help to provide favorable conditions for digestion in the duodenum and small intestine. It is stored in the gall bladder and discharged down the bile duct into the duodenum when food enters the stomach. Apart from salts, bile contains green pigments which results from the decomposition of the haemoglobin of the red cells.

Millions of red blood cells break up everyday. In the liver, their decomposition is completed and the iron from the haemoglobin is stored.

Excess protein cannot be stored in the body. Amino acids which are not built up into proteins and used for growth and replacement are converted to carbohydrates by the removal from the molecule of the amino group, which contains nitrogen. The residue can be converted to glycogen, being stored or oxidized to release energy.
The nitrogen of the amino group is converted in the liver to urea, an excretory product that is constantly eliminated by the kidneys.

Fibrinogen is a protein in the blood plasma; it plays an important part in the clotting action of the blood. 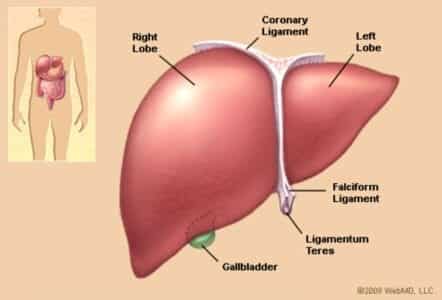 The above list shows that many chemical changes go on in the liver and many of them release energy in the form of heat. This heat is distributed throughout the body by the circulatory system and it helps maintain the body temperature.

The many capillaries and blood spaces in the liver enables it to hold a large volume of blood. This is of value on occasions when the circulatory system is overloaded.

In this organ, fats brought in the blood may undergo certain chemical changes which enables them to be more easily oxidized in the tissues when they are used for energy production.

Poisons compounds, produced in the large intestine by the action of bacteria on amino acids, enter the blood, but on reaching the liver, they are converted to harmless substances, later excreted in urine.

The liver stored minerals like iron, potassium, copper and zinc in it’s cells.

The liver produces the enzyme “prothrombin”. This enzyme plays an active role in blood clotting.

Diseases of the Liver: 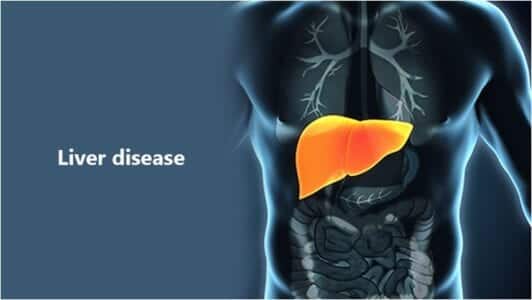 This is the inflammation and destruction of the liver cells. There are two types of hepatitis: (a) infective hepatitis or hepatitis A. This is caused by the virus type A or RNA virus and (b) serum hepatitis or hepatitis B. This is caused by the virus type B or DNA virus.
Hepatitis A is spread through contaminated food, water and palm wine while Hepatitis B is spread through infected blood and blood products given through blood transfusion or sharing of injection needles. Hepatitis is treated by administering appropriate antibiotics to remove the source of infection. The liver is then left to rest and gradually recover by replacing the damaged cells.

This is the disease of the liver in which the liver becomes hard and stiff. The cells if the liver becomes damaged and replaced by hard useless fibrous tissues. It might be caused by prolonged consumption of toxic substances like excessively drinking of alcohol.

These are stony masses or growths on the gall bladder and/or bile duct. They consists mainly of cholesterol, a crystalline fatty masses formed by chemical changes in the composition of bile formed by the Liver.
Gall stones are treated by administering bile acid to the patient to dissolve the stony growth.

This infection is caused by Entamoeba histolytica, the same as parasitic amoeba that causes amoebic dysentery.
Treatment involves first draining the pus and then administering anti-amoebic drugs to get rid of the parasites.

Thus is a malignant growth of the liver. It is also called carcinoma. Treatment method depends bon the size and shape of the growth.